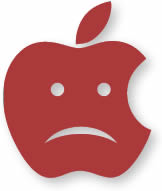 About the Flashback trojan

I wanted to upgrade Xcode, but App Store said the folowing message and couldnt' upgrade the program.
I red different solutions for this problem:
* Trash the apps, restart the App Store, and the update button should be work correctly.
* Trash the "Install Xcode" item from your Applications folder if it exists.
* Moving the app out of the Applications folder also seems to work.
* Check if Spotlight is indexing your Mac HD and Apps folder too! If not exclude your entire hard drive from the spotlight preferences (in the system preferences under "Spotlight") then reopen the preferences pane and remove the exclusion. It will reindex your HD in Spotlight. As soon as the re-index started, you can try to open App Store and try to update your app.
* You can contact Apple Support. You may have to delete each of the apps, and reinstall them. Apple will give you a voucher to purchase them again so you do not have to pay to reinstall them.
* Find adoption.plist file on your system if it exists. Trash it and try the update again in App Store.

And one more, that workrd for me fine:
Control click on the app icon in the Finder/Application folder. Select Show package contents. Go to the _MASReceipt folder and find the reciept file and trash it. Open App Store and install the app. see more on Apple Discussion

I have copied some files from a pendrive to my Desktop and wanted to disconnect it.
But pendrive couldn’t disconnect. I received only an error message:
“The disk -pendrive- is in use and could not be ejected. Try quitting applications and try again.”
I closed all applications. Tried to eject with Eject buttom from my keyboard, tried to move pendirve icon to the trash, tried to use eject command in the Terminal. The error message was the same again and again.
I opened Disk Utility, selected pendrive and tried to eject it. Nothing difference.
Finally I opened Force Quit Applications window and I checked there are not running applications anly the finder.
So I relaunched the Finder and tried eject the pendrive again. It went off well!

I have put a DVD to iMac.
But a short time later I couldn’t find it nor on the Desktop nor anywhere on the Finder.

Tried to press the Media Eject key at the top-right corner of the keyboard, but nothing happened.
Opened iDVD, Disk Utility, iTunes, Toast program and tried to EJECT DISC from these programs from the menubar. Nothing difference. The programs couldn’t see DVD.
Restarted the computer, then I tried to hold down the mouse button. Nothing again.
Restarted the computer again while holding down command-option-o-f, to enter the open firmware dialogue. I hoped to enter “eject cd” command will help. But it works only with power macs not intel macs.
Opened /Applications/Uitilities/Terminal program and tried the “drutil tray eject” command. No result.
Finally I found Force Eject program (http://www.apple.com/downloads/macosx/system_disk_utilities/forceeject.html) and see wonder! DVD was ejected using this little utility.

I have an external USB disk (TrekStor) connected to my iMac. It was disconnected not properly some times before. Later when I connected it to my iMac again I had to wait for a long time to see it in the finder.
last time it was similar issue but disk couldn’t connect at all.
First I opened Disk Utility, selected the external usb disk and started Repair Disk. It started to work but a few minutes later Disk Uitility wrote different ERROR messages with red color and finally it freezed. I disconnected USB disk, restarted imac, connected the disk again and switched on. But nothing. Disk Utility couldn’t see it at all. Tried it more times, tried to connect another imac, but the situation was similar.
It appeared to me the external disk passed out …
It came about my mind Disk Utility can’t repair startup disk if I start it on the startup disk. Let’s try to start Disk Utility from Install disk.
I was lucky: Disk Uitility from the Install Disk could repair USB disk. I erased and reformatted it.
Restarded the iMac connected the external usb disk and it worked fine again.
Until a time. The problems were beginning again shortly.
The full deletion of the disk did not help. Finally repartitioned with Disk Utilty and I can use it again since then.

I received this error message 1-2 times/day first, but later 5-6 times/hour on my new iMac (Leopard, 10.5.5, iMac 2.4 Ghz Intel Core 2 Duo). The sync menu was unavailable from the System Preferences MobilMe menu, also from the top menu on the Finder window (there were inactive). SyncServer used 95%-99% of CPU, iMac was slow.  I had to find a solution.
First I run permission repair from Disk Utility also tired it from Install DVD with Disk Repair. The situation was the same.
Tried to Reset Sync History … on iSync Preferences. But I couldn’t start iSync program.
Tried to set sync with other user. It worked! (I was ready to reinstall Leopard if the situation was similar with other user.)
Next step was to run the following command in the terminal:
/System/Library/Frameworks/SyncServices.framework/Versions/A/Resources/resetsync.pl full
The result was only some new error messages: “SyncServer is unavailable: exception when connecting: connection timeout: did not receive reply”, “Can’t connect to the sync server: NSPortTimeoutException: connection timeout: did not receive reply ((null))” ….
I found a page using Google where a guy suggested to delete SyncServices folder.
However this is strongly discouraged by Apple!  Read the following article: Mac OS X: Do not remove or modify SyncServices folder
But it was the last chance, and it helped me.  So finally I deleted the Local folder from ~/Library/Application Support/SyncServices, restarted the mac and set me.com synchronization again: I set Replace data on computer and everything is working fine again.

One day to another started this problem with Firefox latest version (3.0.6) on Leopard (MacOS X 10.5.6). When I wanted download a file it wanted to save the file to the /Users/admin/Downloads folder but it couldn’t of course because I was logged in as a different user.
Tried to set Firefox Preferences first. Tried to set different download folder, tried to set ask me where to save files, but nothing difference.
Tried to clear download history first from the the Firefox menu: “Tools -> Downloads -> Clean Up”, and after manually deleted the downloads.sqlite file from the Library/Application Support/Firefox/Profiles/ folder. None of that helped.
Entered about:config in the Firefox’s address bar. A list of preferences appeared. Scrolled through the list and reseted any of the following preferences that have a user set status (right-click on the preference and click “Reset”): ▪ browser.download.dir ▪ browser.download.downloadDir ▪ browser.download.folderList ▪ browser.download.lastDir ▪ browser.download.useDownloadDir.
Also tried to delete the prefs.js file from the Library/Application Support/Firefox/Profiles/ folder. No result.
Next step was to run permission repair from Disk Utility. Nothing again.
Decided to completelly reinstall Firefox. Removed all Firefox files from my hard drive with AppCleaner application. After downloaded and installed it. The situation was still the same!!!
Finally I found the internetconfig article that helped me. First I deleted the value (not the key; just the value) from the Library » Preferences » com.apple.internetconfig.plist file. It wasn’t enough so I deleted it again and totally reinstalled Firefox second, too. The download option is working fine again!

Sometime you can get the following error message: “fork: Resource temporarily unavailable”

About the Flashback trojan