The name Major came to England with the ancestors of the Major family in the Norman Conquest of 1066. It comes from the Norman given name Mauger. The name indicates one who is the son of Maugier, an Old French personal name, which is derived from the Old Germanic name Malger, which means council spear … további információ.

The surname of Major was a baptismal name ‘the son of Mauger’ a 13th century font name. Following the Crusades in Europe in the 11th, 12th and 13th centuries, a need was felt for a family name to replace the one given at birth, or in addition to it. This was recognized by those of noble birth, as it added prestige and practical advantage to their status. The bulk of European surnames in countries such as England and France were formed in the 13th and 14th centuries … további információ. 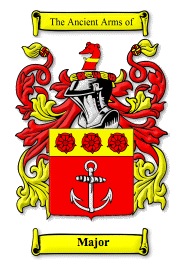 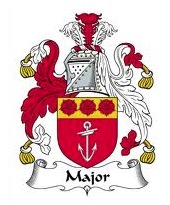 It is also used in some police forces and other paramilitary rank structures.
When used in hyphenated or combined fashion, the term can also imply seniority at other levels of rank, including “general-major” or “major general”, denoting a mid-level general officer, and “sergeant major”, denoting the most senior NCO of a military unit … további információ

The numbers inside the circle show the number of sharps or flats in the key signature, with the sharp keys going clockwise, and the flat keys counterclockwise from C major (which has no sharps or flats.) The circular arrangement depends on enharmonic relationships in the circle, usually reckoned at six sharps or flats for the major keys of F♯ = G♭ and D♯ = E♭ for minor keys. Seven sharps or flats make major keys (C♯ major and C♭ major) that may be more conveniently spelled with five flats or sharps (as D♭ major or B major). … további információ

Major and minor intervals are so-called because certain diatonic intervals (seconds, thirds, sixths, sevenths, and their compounds) may occur in two sizes in the diatonic scale. The larger of the two versions is called major, the smaller one minor. For example, the third occurs both as three semitones away from Re, Mi, La, and Si in the major scale (or in the C major diatonic scale, three semitones above D, E, A, and B), and four semitones away from Do, Fa, and Sol, (or C, F, and G). The smaller, three-semitone version is called the “minor third” and the larger, four-semitone one is called the “major third”. Major intervals invert to minor ones, and vice-versa. For example, a major second inverts to a minor seventh, and the reverse. … további információ

The demand for business majors will always be high because there are an endless number of career opportunities available to individuals with a good business education. Employers in every industry need people who have been trained to organize, plan, and manage within an organization. In fact, there are many companies in the business industry who rely on business school recruiting alone to acquire new employees. … további információ

- major: excellent; serious; severe: ”This rally is, like, major!”,  ”Nick is a major dweeb”,
… további információ and read more here.