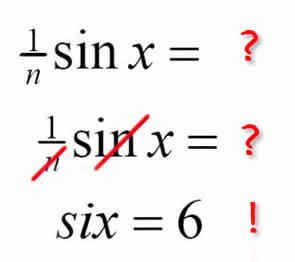 Q: Why do mathematicians often confuse christmas and halloween?
A: oct 31 = dec 25.

Two mathematics were walking across forest when one said, “Where
did you get such a great bike?”
The second mathematics replied, “Well, I was walking along yesterday minding my
math problem when a beautiful woman rode up on this bike. She threw the bike
to the ground, took off all her clothes and said, “Take what you want.”
The first mathematics nodded approvingly, “Good choice; the clothes probably
wouldn’t have fit.”

Q: Why didn’t Newton discover group theory?
A: Because he wasn’t Abel.

Q: What is the first derivative of a cow?
A: Prime Rib!

When it’s cold, what do mathematicians do? Stand in the corner, there it’s always 90 degrees.

Q: Why did the mathematical biologist get her nose pierced?
A: She wanted to change her genus.

Q: Do you already know the latest stats joke?
A: Probably.

The number you have just dialed is imaginary. Please turn your phone by 90 degrees and try again.

Did you know almost all humans have more legs than average?

Heisenberg is speeding down the road, and a cop pulls him over. The cop says “Sir, do you have any idea how fast you were going?” Heisenberg says “No, but i know exactly where i am.”

An infinite crowd of mathematicians enters a bar.  The first one orders a pint, the second one a half pint, the third one a quarter pint…  ”I understand”, says the bartender – and pours two pints.

When a mathematician writes a fantasy book, are the page numbers imaginary?

A topologist turns to a physist and says “what kind of circle has 4 corners?”
The physist then proudly retorts “there can be no circle for a circle has no corners!”
The topologist then calmly replies “ye of little faith, a circle can have corners for it is then a square!”

“My life is all arithmetic”, the young businesswoman explains. “I try to add to my income, subtract from my weight, divide my time, and avoid multiplying…”

5 out of 4 people have problems with math.

Mathematics are like Divinity. You feel both fear and respect for them, they’re both imaginary and real in some sense, and they are always accompanied by an unending and futile effort to understand them.

A physicist, a biologist and a mathematician are sitting in a street cafe opposite an empty house. They see two people go into the house. Time passes, and after a while they see three people walk out of the house.
The physicist says: “The measurements were not accurate.”
The biologist says: “The people who went into the house have reproduced.”
The mathematician says: “Now, if exactly one person enters the house it will be empty again.”

Life is complex. It has a real part and an imaginary part!

In a class, a math professor claims that he can prove everything under the assumption that 1+1=1.  A student challenges him: “Then prove that you’re the pope!”  He ponders for a moment and then replies: “I am one, and the pope is one. Therefore, the pope and I are one.”

C programmers have been seen to press “3″ to get to the fourth floor.

Q: Why do mathematicians, after a dinner at a Chinese restaurant, always insist on taking the leftovers home?
A: Because they know the Chinese remainder theorem!

The total intelligence of a planet is a constant. The population is increasing exponentially …

A large mathematicical conference was once held in Las Vegas, heavily sponsored by the city authorities. However, it was decided not to repeat the offer because the mathematicians showed no interest in the casinos or gambling.

Math is like love. It’s a simple idea but it gets complicated.

A man went to the post office to post a fishing rod which was five feet long and all in one piece. He was upset to find that the maximum parcel length the post office would accept was four feet.
He solved the problem by placing the fishing rod diagonally in a rectangular box of length four feet and width three feet.

Q: What do you get when you add two apples to three apples?
A: An American high school math problem, apparently.

News headline: Statistician drowned in river with an average depth of 10 cm.

Jesus Christ could never have become a professor of mathematics. All are agreed that he was a wonderful teacher, but he never published anything.

An infinite number of mathematicians walk into a bar. The first one orders a beer. The second orders half a beer. The third, a quarter of a beer. Before the fourth mathematician can place his order, the bartender says “You’re all idiots”, and pours two beers.

Q: what is the difference between a phd in mathematics and a large pizza?
A: a large pizza can feed a family of four.

The interviewer asks: What is 2+2?
The engineer says: 4.
The mathematician says: Well in the general case it is four, but I have this lovely little proof for the case where blahblah …
The accountant says: What do you want it to be?

How does a phisicist prove that all odd numbers are primes?
3-yes. 5-yes. 7-yes. 9-mesuring error.

How does a grade school student prove that all odd numbers are primes?
3-yes. 5-yes. 7-yes. 9-high school material.

How does a high school student prove that all odd numbers are primes?
3-yes. 5-yes. 7-yes. 9-isn’t on the test.