“This early paradise was lost rapidly and brutally. World War II broke out, and soon Hungary joined in as an ally of Nazi Germany. In 1942, my father was taken by the Hungarian Army to serve as a forced laborer, in the company of other Jewish men. They were sent to the Russian front, where most of them perished. Luckily for my father, the Soviet Army advanced so rapidly after Stalingrad that he was captured by the Soviets before the Nazis could kill him. Then, he was used by the Soviets as a forced laborer. He was released only in 1946, so we did not know for four years whether or not he was alive.” 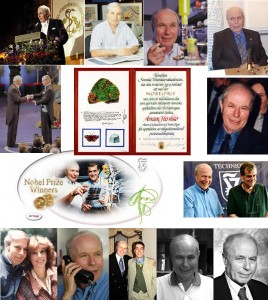 “In the spring of 1944, Hungary’s dictator Horthy understood that Germany was loosing the war, and planned to desert. The Germans sensed this and quickly occupied Hungary. This was followed by the rapid extermination of much of the Jewish population of Hungary. In May-June 1944, most Jewish people were concentrated in ghettos and then transported to death camps in Poland. I was six years old at that time. We were in a ghetto at the outskirts of Karcag for a couple of weeks and then were transferred to a terribly crowded ghetto in Szolnok, which is a larger city in the same district. From there, Jews from the entire district were transported further on freight-trains. They were told that they were sent to work, but after the war we learned that most of the trains were headed for Auschwitz. By some random event, my family and I were put on one of the few trains that headed for Austria, where Jews were actually used for labor. This group included my mother with us two children, my paternal grandparents and my three aunts. In Austria we were in a small village near Vienna, where adults worked in the fields and in a factory. We were liberated by the Soviet Army on the spring of 1945. My maternal grandparents perished in the Holocaust, along with 360,000 Hungarian Jews and almost two-thirds of the Jewish people of Karcag. Following our reunion with my father in 1946, the family lived for three years in Budapest, where my father found job as a schoolteacher. The family emigrated to Israel in 1950.”

“In Israel we settled in Jerusalem and I started a new and very different life. Of course, there were initial difficulties of being new immigrants. We had to learn a new language, Hebrew.”

“At school I was received well by the other children. These were times of massive immigration to Israel, so a new immigrant child with a Hungarian accent did not stand out too much (I am told that I still have some Hungarian accent, especially in English, though my Hungarian language is quite poor now). I was a good student, and learned easily different subjects, such as mathematics, physics, literature, history and even Talmud!”

“In 1956, I started to study at the Hebrew University – Hadassah Medical School in Jerusalem, which was the only medical school in Israel at that time (there are now four). In the basic science part of my medical studies, I fell in love with biochemistry.”

“I started to work in Mager’s laboratory in 1960. At that time, there was no formal M.D.-Ph.D. program at the Hebrew University, but it was possible to do a year of research between the preclinical and the clinical years of medical studies. I did that, and although I completed medical studies later on, I already knew by the end of that year that I was going to do research, rather than clinical practice.”

“In 1969-71 I was a post-doctoral fellow with Gordon Tomkins at the Department of Biochemistry and Biophysics of the University of California in San Francisco.”

“I returned from San Francisco to Israel in 1971. Originally, I planned to return to the Hebrew University in Jerusalem, but a new medical school opened in Haifa and I was offered to be its Chairman of Biochemistry.”

“The story of the discovery of the ubiquitin system is described in my lecture, and here I add only some anecdotal episodes from these times. The fractionation of reticulocyte lysates to Fractions 1 and 2 was based on a trick that I learned from Mager in the purification of enzymes of purine nucleotide metabolism from erythrocytes. Hemoglobin constitutes about 80-90% of total protein of erythrocytes and reticulocytes, and therefore the first task in the purification of any enzyme from these cells is to get rid of the great mass of hemoglobin. This is most conveniently done by using the anion exchange resin DEAE-cellulose, which binds most non-hemoglobin proteins, but not hemoglobin. In our case, this procedure resulted in loss of activity, which could be recovered by adding back Fraction 1 that contained not only hemoglobin but also ubiquitin. In fact, in our laboratory jargon we called ubiquitin for some time “Red”, because of the red color of hemoglobin in this fraction. After we found that the factor in this fraction (i.e., ubiquitin) remains active after boiling for 30 minutes, we consulted a protein expert at the Technion who told us that our factor cannot be a protein. We found, however, that it is a protein, based on its sensitivity to the action of proteinases. Maybe the lesson from this story is that it is dangerous to consult experts.”

“After working for 6 years at the Technion, I had a sabbatical year due in 1977-78. I had a problem in choosing a person with whom I would spend my sabbatical year. I knew the people in the (then) small protein degradation field, and I was not very enthusiastic. Many people in the field had their pet theories about the cause for the high selectivity of intracellular protein degradation, without much (or any) experimental evidence. Once again, I was lucky. In 1976, I attended a Fogarty meeting on a quite general subject at the National Institutes of Health. Irwin Rose also attended this meeting.”

“Ernie Rose is the third person, in addition to Mager and Tomkins, who had a great influence on my scientific life. He is very different from both Mager and from Tomkins. He likes problem solving, and his attitude to science is highly analytical. I am more intuitive, so we complemented each other very well. He is so brilliant that people do not always understand his ideas and are a little afraid of him. People are also often apprehensive of him because he can be very critical, and does not hesitate to voice his criticisms. We got along very well over a period of 20 years, which included several sabbaticals and many summer visits in his laboratory at Fox Chase Cancer Center in Philadelphia.”

“When I look back at my life until now, I am amazed how fortunate I have been in both my personal and my scientific life. After escaping the Holocaust, both my parents lived in Israel to a good old age. I am very happy with my wife, children and grandchildren. I was very fortunate to have outstanding mentors in science, and then to be able to use the knowledge gained for a significant contribution. If only there were some peace in the world, including between Israel and its neighbors – I would be completely satisfied.”
-Avram Hershko-

Crooked Timber: Some experiences beyond chemistry of the 2004 Nobel Prize in Chemistry by István Hargittai