“My true guiding principle…which I have been fully aware of ever since I have come upon myself as a composer: the ideal of the brotherhood of peoples, brotherhood created despite war and all conflict. It is this ideal which I work with all my power to serve through my music; this is why I do not avoid any influence, be it from Slovak, Rumanian, Arabic or any other source. The only thing that matters is that the source be pure, fresh and healthy!” 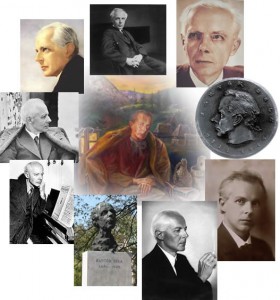 Through his far-reaching endeavors as composer, performer, educator, and ethnomusicolgist, Béla Bartók emerged as one of the most forceful and influential musical personalities of the twentieth century.

From its roots in the music he performed as a pianist — Mozart, Beethoven, Chopin, Brahms — Bartók’s own style evolved through several stages into one of the most distinctive and influential musical idioms of the first half of the twentieth century. The complete assimilation of elements from varied sources — the Classical masters, contemporaries like Debussy, folk songs — is one of the signal traits of Bartók’s music. The polychromatic orchestral textures of Richard Strauss had an immediate and long-lasting effect upon Bartók’s own instrumental sense, evidenced in masterpieces such as Music for Strings, Percussion, and Celesta (1936) and the Concerto for Orchestra (1945). Bartók demonstrated an especial concern with form in his exploitation and refinement of devices like palindromes, arches, and proportions based on the “golden section.” Perhaps above all other elements, though, it is the ingenious application of rhythm that gives Bartók’s music its keen edge. Inspired by the folk music he loved, Bartók infused his works with asymmetrical, sometimes driving, often savage, rhythms, which supply violent propulsion to works such as Allegro barbaro (1911) and the Sonata for Two Pianos and Percussion (1937). If a single example from Bartók’s catalogue can be regarded as representative, it is certainly the piano collection Mikrokosmos (1926-1939), originally intended as a progressive keyboard primer for the composer’s son, Peter. These six volumes, comprising 153 pieces, remain valuable not only as a pedagogical tool but as an exhaustive glossary of the techniques — melodic, harmonic, rhythmic, formal — that provided a vessel for Bartók’s extraordinary musical personality.

noted for the Hungarian flavour of his major musical works, which include orchestral works, string quartets, piano solos, several stage works, a cantata, and a number of settings of folk songs for voice and piano.

Works are cataloged with the designation Sz (Szöllösy).

“Of the three musicians who dominated the musical scene during the first half of the 20th century – Stravinsky, Schoenberg and Bartók – it is the Hungarian master who, despite his intellectual control, remained the nearest to the instinctual, the irrational in music, and thus to the Dionysian spirit in art.”
– Mosco Carner –

Béla Bartók is recognised as one of the most important composers of the 20th century * Style grew out of romanticism and nationalism to embrace new currents heard in Debussy’s music * Inspired by Hungarian traditional songs and dances which he collected with Kodály * Incorporated folk modes and irregular rhythmic patterns into his highly original scores * Skills as a pianist are apparent in the novel keyboard writing of Piano Concertos Nos.1-3 and Mikrokosmos * A master of instrumentation, as heard in his ravishing ‘night music’ movements * Highly sophisticated musical structures often relying on proportional relationships * String Quartets Nos.1-6 are masterpieces of the genre * Works have been championed by the world’s leading conductors and performers including Solti, Boulez and Rattle

the greatest Hungarian composer, was one of the most significant musicians of the twentieth century. He shared with his friend Zoltán Kodály, another leading Hungarian composer, a passion for ethnomusicology. His music was invigorated by the themes, modes, and rhythmic patterns of the Hungarian and other folk music traditions he studied, which he synthesized with influences from his contemporaries into his own distinctive style.

There are reports that the Bartóks lived in abject poverty during their New York years. Although this is not strictly true, they did live in obscurity and were by no means comfortably well-off. When Bartók became ill with leukemia, the American Society for Composers, Authors, and Publishers (ASCAP) paid his medical expenses and helped him to get better treatment. To ease Bartók’s financial burden the conductor Fritz Reiner and violinist József Szigeti convinced the conductor Serge Koussevitzky to have his foundation commission an orchestral piece from Bartók. The result was Concerto for Orchestra, 1943, Bartók’s most popular piece. In 1944 he composed a sonata for solo violin, written for Yehudi Menuhin. Bartók’s last two major works, a third piano concerto, which includes bird calls and sounds of nature, and a viola concerto, both left unfinished at his death, were completed by his Hungarian colleague, Tibor Serly.

These late pieces caught the spirit of the times. One 1946 review claimed “the music of Bartók ennobles all of music. And the contemporary world will soon be proud to say, ‘We lived in the time of Bartók.’” Many of his works entered and have remained in the orchestral and chamber repertoires.

While composing The Mandarin Bartók came under the influence of Stravinsky and Schönberg, and produced some of his most complex music in the two violin sonatas of 1921-2. At the same time he was gaining international esteem: his works were published by Universal Edition and he was invited to play them all over Europe. He was now well established, too, at home. He wrote the confident Dance Suite (1923) for a concert marking the 50th anniversary of Budapest, though there was then another lull in his composing activity until the sudden rush of works in 1926 designed for himself to play, including the Piano Concerto no.1, the Piano Sonata and the suite Out of Doors. These exploit the piano as a percussion instrument, using its resonances as well as its xylophonic hardness. The search for new sonorities and driving rhythms was continued in the next two string quartets (1927-8), of which no.4, like the concerto, is in a five-section palindromic pattem (ABCBA).

was born in the small Banatian town of Nagyszentmiklós, March 25, 1881.

His pessimistic attitude towards composing was lifted by the stormy and inspiring contact with Klára Gombossy in the summer of 1915 (Gillies 1993, 405). This interesting episode in Bartók’s life remained hidden until it was researched by Denijs Dille between 1979 and 1989 (Dille 1990, 257–277). Bartók started composing again, including the Suite for piano opus 14 (1916), and The Miraculous Mandarin (1918) and he completed The Wooden Prince (1917).

Bartók felt the result of World War I as a personal tragedy (Stevens 1993, 3). Many regions he loved were severed from Hungary: Transylvania, the Banat where he was born, and Pozsony where his mother lived. Additionally, the political relations between Hungary and the other successor states to the Austro-Hungarian empire prohibited his folk music research outside of Hungary (Somfai, 1996, 18). Thrown largely onto himself, he experimented with extreme compositional practices, the peak being his Sonata for Violin and Piano No. 1 (Op. 21) and No. 2. With the noteworthy Eight Improvisations on Hungarian Peasant Songs (1920), and the sunny Dance Suite (1923, year of his second marriage), we have summed up all Bartók’s works of 1919–25.

In 1926, Bartók needed a significant piece for piano and orchestra with which he could tour in Europe and America. In the preparation for writing his First Piano Concerto, he wrote his Sonata, Out of Doors, and Nine Little Pieces, all for solo piano (Gillies 1993, 173). He increasingly found his own voice of his maturity. The style of his last period (named “Synthesis of East and West” (Gillies 1993, 189)) is hard to define let alone to stick under one term. In his mature period, Bartók wrote relatively few works but most of them are large-scale compositions for large settings. Only his voice works have programmatic titles and his late works often adhere to classical forms.

Bartók also made a lasting contribution to the literature for younger students: for his son Péter’s music lessons, he composed Mikrokosmos, a six-volume collection of graded piano pieces.

The renowned house on Csalán Road, which guards and promulgates the memory of the greatest genius of Hungarian music, was built in the skirts of the forests-hills of Buda in 1924. In those years, the neighbourhood, with exuberantly splendid gardens and only a few houses, was more a part of what we would call it today – a “landscape protection district”, than the noisy Capital. The composer, who could not stand the clamour of the metropolis, the din of machines and engines and the inquisitive and prying nature of people, found an ideal home in the district rich in fragrant fresh air and tranquillity only broken by the twittering of birds. From 1932, the house and garden previously bearing the number 27, and later number 29 as historical fate will it so was Béla Bartók’s last residence in Hungary. Now it is a museum, more precisely, it is a memorial site that attentively guards Bartók’s personal belongings and regularly evokes his spirit through his music.
The former house of Bartók was partly reconstructed and converted into a memorial house by the capital city of Budapest on the centenary of his birth, in 1981. At that time the renovation of the three-storey villa house was carried out according to the plans of the architect György Fazekas. On the ground floor, an entrance that widens into a hall was made from the former caretaker’s compartment. A new and spacious staircase, which changes the façade of the house, was erected, and an intimate chamber hall for concerts was formed by opening the adjacent rooms on the first floor into one hall room. In the three rooms on the second floor, where Bartók mostly lived and worked, is the museum presenting photographs of the composer’s life and his personal belongings, all carefully protected by his successors. Both the new and earlier goldsmith’s work of the new entrance overlooking the garden is the craftwork of goldsmith artist József Pölöskei.