He is a Hungarian computer software executive who, as head of Microsoft’s application software group, oversaw the creation of Microsoft’s flagship office applications. He has now own company: Intentional Software. In 2007, he became the fifth space tourist and the second Hungarian in space. 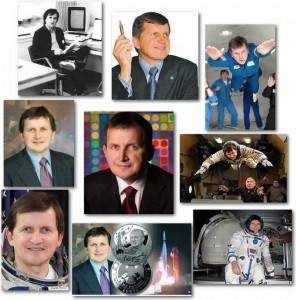 He left his homeland at 17 to work as a computer programmer in Copenhagen, Denmark. He moved to the United States in 1968.

Simonyi earned his B.S. in engineering and mathematics from the University of California at Berkeley and his doctorate in computer science from Stanford University.

From 1972 to 1980, he worked at Xerox Corp.’s Palo Alto Research Center (PARC),
where he created with Butler Lampson the first WYSIWYG text editor, the Bravo.

Simonyi gained his American citizenship in 1982.

In th previous year Simonyi joined a start-up company called Microsoft where he
developed software by 20 years. At Microsoft Simonyi held the titles of
director of application development, chief architect, and distinguished
engineer and he led the teams that developed Microsoft Word, Microsoft
Excel, and other successful software applications. Simonyi introduced the techniques of object-oriented programming that he had learned at Xerox to Microsoft and developed the Hungarian notation convention for naming variables that has been widely adopted.

Simonyi unexpectedly left Microsoft in August 2002 to found with business partner Gregor Kiczales Intentional Software Corp. (based in Bellevue, Wash), a software engineering company dedicated to assisting software developers in capturing the tremendous latent value that is usually lost in the design and development process.
This company markets the intentional programming concepts Simonyi developed at Microsoft Research. In this approach to software, a programmer first builds a toolbox specific to a given problem domain (such as life insurance). Domain experts, aided by the programmer, then describe the program`s intended behavior in a WYSIWYG-like manner. An automated system uses the program description and the toolbox to generate the final program. Successive changes are only done at the WYSIWYG level.

The method begins with the intentions of the people inside an organization who know what a program should do. Mr. Simonyi calls these people “domain experts,” and he expects them to work with programmers to list all the concepts the software must possess.

“Programming is very complicated,” Mr. Simonyi said. “Computer languages are really computer-oriented. But we can make it possible for domain experts to provide domain information in their own terms which then directly contributes to the production of the software.”

Intentional programming has three great advantages: The people who design a program are the ones who understand the task that needs to be automated; that design can be manipulated simply and directly, rather than by rewriting arcane computer code; and human programmers do not generate the final software code, thus reducing bugs and other errors.

2004: Simonyi received the Wharton Infosys Business Transformation Award for the industry-wide impact of his innovative work in information technology.

His boyhood interest in space resulted in his selection as Hungary’s Jr. Astronaut at age 13, for which he won a trip to Moscow and met one of the first cosmonauts, Pavel Popovich.

He is a trained pilot in multi-engine aircraft with current licenses in jets and helicopters and more than 2,000 hours of flying time.

As a software pioneer and aviator, Simonyi brings his passion for flight and engineering to the upcoming 2007 Orbital Spaceflight Scientific Mission. His goals for his mission are to advance civilian space flight, assist space station research, and involve the world’s youth in the science of space travel. He is convinced that one day, humans will travel and live comfortably in space.

He launched on April 7, 2007 (GMT), on board Soyuz TMA-10. He shared a ride with two Russian cosmonauts to the International Space Station, and returned aboard Soyuz TMA-9, scheduled to depart from the ISS on April 20, 2007.

As of February 2008 Simonyi had been dating Martha Stewart for 15 years. In 2008 however the two separated and on August 8 Simonyi became engaged to a Swedish millionaire’s daughter, Lisa Persdotter, who is 32 years younger than him. The couple married on November 22nd in a private ceremony in Gothenburg, Sweden attended by their closest friends, among them Bill Gates.
Simonyi is the owner of the purpose-built super yacht named Skat.
Simonyi’s residence in Medina, Washington, “Villa Simonyi”, is a modern house designed by architect Wendell Lovett, where Simonyi displays his collection of paintings by Roy Lichtenstein and Victor Vasarely.

John Markoff, writing in The New York Times (12 Nov 1990), relates the following anecdote: “He enjoys taking visitors to the machine shop in the basement of his new home, complete with lathe and drill press. ‘In Hungary,’ he said, ‘they told us that the workers would never own the means of production.’”

Simonyi has been an active philanthropist. In 1995 he established an endowed chair for the Charles Simonyi Professor of the Public Understanding of Science at Oxford University, the first and current occupant of which is Richard Dawkins. He also established a Charles Simonyi Professor for Innovation in Teaching endowed chair at Stanford University. In January 2004, Simonyi created the $50 million Charles Simonyi Fund for Arts and Sciences, through which Simonyi plans to support Seattle-area arts, science, and educational.

“Although I am known as Charles Simonyi, I was born here in Hungary as Simonyi Karoly,” he said. “I have never forgotten about Hungary, where I came from; the memories of my mother country are kept deep in my heart.”
- Charles Simonyi -

The NewYork Times, by Jason Pontin: Awaiting the Day When Everyone Writes Software

Charles in Space: Welcome to a Dream to Come True … Charles Simonyi’s Intentional Software is making software that writes its own code, easing technical burden and reducing human error.

Edge.org, by John Brockman: “INTENTIONAL PROGRAMMING” A Talk With Charles Simonyi (“The WYSIWYG”)

Charles Simonyi, the American software billionaire, took off on his second rocket trip as a space tourist today – becoming the first to go into space twice.

US billionaire heads into space again

Hungarian-born Charles Simonyi, 60, who made much of his fortune developing software at Microsoft, roared off from the Baikonur cosmodrome in the Kazakh steppe and will dock with the ISS in two days’ time.

Mr Simonyi, who paid $60 million (£41.2m) for both space trips, has made history as the first space tourist to make the journey twice.

He is crammed into the small interior of the rocket alongside Russia’s Gennady Padalka and US astronaut Michael Barratt.

His 28-year-old Swedish wife Lisa Persdotter, clad in a floor length fur coat, was among family and friends in Kazakhstan to send him off…

Yahoo News: A US billionaire space tourist has blasted off aboard a Russian rocket to the International Space Station for a second time.

Expedition 19 Commander Gennady Padalka, NASA Flight Engineer Michael Barratt and spaceflight participant Charles Simonyi, a U.S. citizen, are scheduled to launch aboard the Soyuz TMA-14 spacecraft to the station from the Baikonur Cosmodrome in Kazakhstan on Thursday, March 26, at 6:49 a.m. CDT (5:49 p.m. Kazakhstan time). Simonyi will fly to the station under an agreement with the Russian Federal Space Agency.

After a two-day trip, the Soyuz will dock to the station on Saturday, March 28. Japan Aerospace Exploration Agency Flight Engineer Koichi Wakata is scheduled to launch Wednesday aboard space shuttle Discovery’s STS-119 mission. Wakata will remain with Padalka and Barratt until returning to Earth on shuttle Endeavour’s STS-127 mission in June. Padalka, Barratt and Wakata will serve on the station as part of Expedition 20, the station’s first six-person crew.

Expedition 18 Commander Michael Fincke, Flight Engineer Yury Lonchakov and Simonyi will return to Earth Tuesday, April 7, at about 3:22 a.m. (2:22 p.m. Kazakhstan time) in the Soyuz TMA-13 spacecraft now docked to the station. Fincke and Lonchakov have been aboard the orbiting laboratory since October 2008.

Video: Life on the ISS, Charles shows us some of the basics of life on the ISS in this video sent down from the space.

Video: Charles gives a tour of the ISS

Video: Charles arrives on the ISS, Video showing Charles and his crew docking with the ISS, and Charles’ first conversations with friends and family in mission control.

Charles arrives on the International Space Station, After a two day journey on the Soyuz TMA-14 spacecraft, Charles and his crew mates docked with the ISS at 9.05 am edt. At 12:36pm edt the hatch was opened and the crew floated into the ISS.

Charles In Space: Returns to Space