He is a Hungarian-born American chemist. His research involved the generation and reactivity of carbocations via superacids, and for this research, Olah was awarded a Nobel Prize in Chemistry in 1994. Soon after, he was awarded the Priestley Medal, the highest honor granted by the American Chemical Society

After the high school of Budapesti Piarista Gimnazium he studied, then taught, at what is now Budapest University of Technology and Economics. As a result of the 1956 Hungarian Revolution, he and his family moved briefly to England and then to Canada.

“I married in 1949 Judith Lengyel, the best thing ever to happen to me in my life. We knew each other from our early youth and are happily married now for more than 45 years. Judy worked initially as a technical secretary at the Technical University. After we were married she enrolled to study chemistry. She probably rightly recalls that I was entirely responsible for this step and she only agreed to get along with her single minded husband who seemed to believe that there is little in life outside chemistry. From my point of view for husband and wife to closely understand each other’s work and may even work together was most desirable. Our older son George John was born in Budapest in 1954. After we fled Hungary in early December of 1956, we reached late in December London where my wife had relatives. We subsequently moved on in the spring of 1957 to Canada, where my mother-in-law lived in Montreal after the war. During our stay in London for the first time I was able to establish personal contact with some of the organic chemists, whose work I knew and admired from the literature. I found them most gracious and helpful. In particular Christopher Ingold and Alexander Todd extended efforts on behalf of a young, practically unknown Hungarian refugee chemist in a way which I never forget and for which I am always grateful.”
- George Andrew Olah -

It was at Dow that Olah began his work on stable carbocations. Although known as a common intermediate in organic reactions, carbocations were too short-lived and unstable to observe. Olah used superacids and ultracold solvents to disassemble, examine, and then recombine carbocations. His breakthrough, announced in 1962, launched a new field of organic chemistry and led to the development of new carbon-based fuels and higher-octane gasoline. In 1964 he transferred to Dow’s laboratories in Framingham, Massachusetts, and the following year returned to academic life at Western Reserve University in Cleveland, Ohio, becoming chair of the chemistry department. He remained there until 1977, becoming a naturalised US citizen in 1971, before joining the University of Southern California at Los Angeles, where he became director of the Loker Hydrocarbon Research Institute in 1980.

Olah was awarded the Nobel Prize in Chemistry in 1994 for his research in carbocation chemistry and for uncovering new ways to use hydrocarbons in the petroleum industry.. 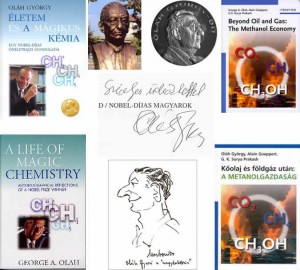 “As rewarding as the Nobel Prize is personally to any scientist, I feel it is also recognition of all my past and present students and associates (by now numbering close to 200), who contributed over the years so much through their dedicated hard work to our joint effort. It also recognizes fundamental contributions by many colleagues and friends from around the world to a field of chemistry, which is not frequently highlighted or recognized.”
- George Andrew Olah -

Olah is currently a distinguished professor at the University of Southern California and the director of the Loker Hydrocarbon Research Institute. In 2005. Recently, he has been engaged in the development of an electric motor car driven by fuel cells instead of batteries. In 2005, Oláh wrote a book The Methanol Economy promoting a hypothetical future economy in which methanol has replaced fossil fuels in transportation. He lists arguments against the hydrogen economy and discusses the generation of methanol from carbon dioxide or methane.

NobelPrize: George A. Olah, The Nobel Prize in Chemistry 1994

Hungarian Academy of Sciences: George A. Olah at 80