In 1944, the 15-year-old Kertesz was deported to Auschwitz and then to Buchenwald, and was liberated by American troops in 1945. (He and Nobel laureate Elie Wiesel, who won the peace prize, do not know each other, but were on the same transports and in the camps at the same time.) He then returned to Budapest, and his first jobs were in journalism, but he was dismissed from his position in 1951, when the newspaper adopted the Communist party line. After that, he began writing and translating German authors into Hungarian.

Kertesz has survived not only Hitler, but also Stalin and the Hungarian Revolution and its aftermath. For 40 years, he had no passport and couldn’t leave Hungary, nor did he have access to the work of many major Western writers. 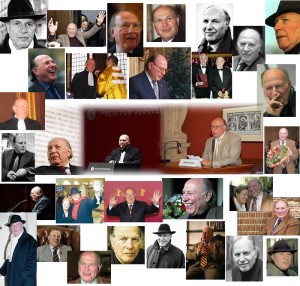 Kertész’ best-known work, Fatelessness (Sorstalanság), describes the experience of fifteen-year-old György (George) Köves in the concentration camps of Auschwitz, Buchenwald and Zeitz. Some have interpreted the book as quasi-autobiographical, but the author disavows a strong biographical connection. His writings translated into English include Kaddish for a Child Not Born (Kaddis a meg nem született gyermekért) and Liquidation (Felszámolás).

Kertész initially found little appreciation for his writing in Hungary and moved to Germany. Mr. Kertész started translating German works into Hungarian and did not publish another novel until the late 1980s. He continues to write in Hungarian and submits his works to publishers in Hungary.

A film based on his novel Fatelessness was made in Hungary in 2005 for which he wrote the script. Although sharing the same title, the movie is more autobiographical than the book. The film was released at various dates throughout the world in 2005 and 2006.

The London-based Wilkinson said that in translating Kertesz, there’s an advantage to having a familiarity with the totality of his writing, as there are many allusions to works by such other writers as Nietzsche, Rilke, Kafka, Camus, “that are not flagged at all but for which clues are to be found. Sorting these out is hard work but ultimately hugely rewarding because it gives a real sense of the tradition of great writing into which Kertesz fits.”

The Nobel Prize in Literature for 2002
is awarded to the Hungarian writer Imre Kertész
“for writing that upholds the fragile experience of the individual against the barbaric arbitrariness of history”. 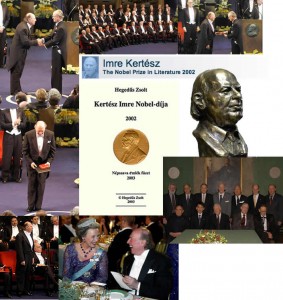 “Kaddish for a Child Not Born,” published in Hungarian in 1990, is the meditation of a man who chooses not to bring a child into a world that could produce Auschwitz and Buchenwald.

“In his writing Imre Kertész explores the possibility of continuing to live and think as an individual in an era in which the subjection of human beings to social forces has become increasingly complete. His works return unremittingly to the decisive event in his life: the period spent in Auschwitz, to which he was taken as a teenage boy during the Nazi persecution of Hungary’s Jews. For him Auschwitz is not an exceptional occurrence that like an alien body subsists outside the normal history of Western Europe. It is the ultimate truth about human degradation in modern existence.
Kertész’s first novel, Sorstalanság, 1975 (Fateless, 1992), deals with the young Köves, who is arrested and taken to a concentration camp but conforms and survives. The novel uses the alienating device of taking the reality of the camp completely for granted, an everyday existence like any other, admittedly with conditions that are thankless, but not without moments of happiness. Köves regards events like a child without completely understanding them and without finding them unnatural or disquieting – he lacks our ready-made answers. The shocking credibility of the description derives perhaps from this very absence of any element of the moral indignation or metaphysical protest that the subject cries out for. The reader is confronted not only with the cruelty of atrocities but just as much with the thoughtlessness that characterised their execution. Both perpetrators and victims were preoccupied with insistent practical problems, the major questions did not exist. Kertész’s message is that to live is to conform. The capacity of the captives to come to terms with Auschwitz is one outcome of the same principle that finds expression in everyday human coexistence.

In thinking like this, the author concurs with a philosophical tradition in which life and human spirit are enemies. In Kaddis a meg nem született gyermekért, 1990 (Kaddish for a Child not Born, 1997), Kertész presents a consistently negative picture of childhood and from this pre-history derives the paradoxical feeling of being at home in the concentration camp. He completes his implacable existential analysis by depicting love as the highest stage of conformism, total capitulation to the desire to exist at any cost. For Kertész the spiritual dimension of man lies in his inability to adapt to life. Individual experience seems useless as soon as it is considered in the light of the needs and interests of the human collective.

In his collection of fragments Gályanapló (“Galley Diary”), 1992, Kertész demonstrates his full intellectual scope. “Theoretical justifications are merely constructions”, he writes, but nevertheless conducts an untiring dialogue with the great tradition of cultural criticism – Pascal, Goethe, Schopenhauer, Nietzsche, Kafka, Camus, Beckett, Bernhard. In essence, Imre Kertész is a minority consisting of one individual. He regards his kinship with the concept of Jew as a definition inflicted on him by the enemy. But through its consequences this arbitrary categorisation has nevertheless been his initiation into the deepest knowledge of humanity and the age in which he lives.
The novels that succeeded Sorstalanság, 1975 (Fateless, 1992), A kudarc (“Fiasco”), 1988, and Kaddis a meg nem született gyermekért, 1990 (Kaddish for a Child not Born, 1997), can almost be characterised as comments and additions to the first and decisive work. This provides the theme of A kudarc. While he waits for an expected refusal of his real novel, the one about Auschwitz, the aging author spends his days writing a contemporary novel in the style of Kafka, a claustrophobic description of socialist Eastern Europe. In the end, he is informed that his previous book will, in spite of everything, be published, but all he can feel is emptiness. On display in the literary marketplace, his personality is transformed into an object, his secrets into banalities.

The refusal to compromise in Kertész’s stance can be perceived clearly in his style, which is reminiscent of a thickset hawthorn hedge, dense and thorny for unsuspecting visitors. But he relieves his readers of the burden of compulsory emotions and inspires a singular freedom of thought.” 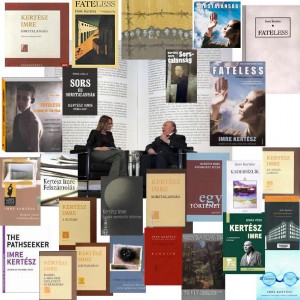 In the early 1980s Kertész was still relatively unknown writer in his own country. He was not mentioned in A History of Hungarian literature, edited by Tibor Klaniczay (1983), and Lóránt Czigány mentioned him only in passing in The Oxford History of Hungarian Literature (1984). Since the “quiet revolution” of 1989, Kertész’s work started to gain international attention. His books were translated among others into French, Swedish, German and English. For a time Kertész was a member of the Hungarian Writers’ Association, but he then resingned in protest; the organization was accused of Anti-Semitic statements. A leader of the governmental party, the poet Sándor Csoóri, wrote in a right-wing journal, “Liberal Hungarian Jewry intends to ‘assimilate’ the Hungarians to their style and thinking.”

In the 1990s Kertész published more works than in the previous decades. A Számuzött nyelv (2001), a collection of essays, included his address at Berlin’s Renaissance Theatre in November 2000. Kertész ended it with the word “Love” – “Und wenn Sie jetzt fragen, was mich heute noch hier auf Erden hält, was mich am Leben hält, antworte ich, ohne zu zögern: die Liebe.” According to Kertész, we can speak today of the globalization of the Holocaust, or even its inflation. In another essay, published in Die Zeit, Kertész dismissed Stephen Spielberg’s film Schildler’s List as kitsch. The Holocaust is a trauma of the whole European civilization, not only a matter between the Jews and the Germans. After the Nobel Prize, Kertész finished the novel Felszámolás (2003), in which a publisher tries to find the lost work of a writer, a Holocaust survivor, who has committed suicide.

“But, while Kertesz’s entire literary output is given over to the Holocaust, which, for Hungarian Jews, began after March 19, 1944, when the Germans overran the country, his approach to it is less documentary or memoir-driven, more an enormous effort to understand and find a language for what the Holocaust says about the human condition. For Kertesz it is less a question of what happened, at one particular historical instant, to the Jews as such; but what the phenomenon says about Europe in particular and humanity in general.”
- George Szirtes, Times Literary Supplement –

“Imre Kertész’s literary work, for the greater part, has always been obscured by his subject, and it will take a goodly lapse of time yet for that not to obscure it.”
- Péter Nádas, The Hungarian Quarterly -

“It is the logic of this survival — that he can “no longer survive, did not wish to survive, indeed probably was not even capable of survival” — that Kertész’s work, from novel to novel, traces in all of its complexity, brilliantly, poetically, relentlessly.”
- Amos Friedland, The Globe and Mail -

Guardian: A man apart, Imre Kertész was sent to Auschwitz as a schoolboy, and his memories of life there inform his controversial novel Fatelessness and all his later work. He was awarded the Nobel in 2002. He talks to Julian Evans

Guardian: The language of exile

Transcript Review: Imre Kertész: The Nobel Dilemma – Now is the Time to Speak!

The NewYork review of Books: Imre Kertész by David Levine