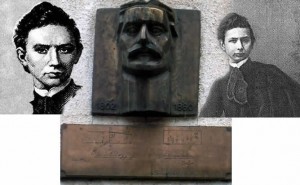 Bolyai came to the conclusion that the postulate is independent of the other axioms of geometry and that different consistent geometries can be constructed on its negation. He wrote to his father:

“I have discovered things so wonderful that I was astounded … I have created a new, another world out of nothing… “.

János Bolyai went up to class 4 of the Calvinist College in Marosvásárhely at the age of 12 years – 3 years earlier than is usual – as a real child genius, and by the time he was 13 had mastered calculus and other forms of analytical mechanics. At the age of 15, he pointed out a nice angle trisection, in the solution of which he made use of one of the branches of the xy=c hyperbola. He was an outstanding linguist speaking nine foreign languages including Chinese and Tibetan. The extremely talented child shortly became familiar with Euclides’s six books, Leonhard Euler’s (1707-1783) algebra and even the main part of George Vega’s (1754-1802) four-volume handbook.

In 1816 Farkas wrote to his friend Gauss asking him if he would let János live with him and take him on as a pupil so that he might receive the best possible mathematical education. Certainly it would have been a wonderful education for János and it is interesting to speculate what benefits might have come to the world of mathematics if he had accepted the plan. Gauss did not answer to his letter.
When János graduated from Marosvásárhely College on 30 June 1817 it was not clear how he might obtain a good mathematical education. Neither of the universities at Pest or Vienna offered a good quality mathematical education at this time, and Farkas could not afford to send his son to a more prestigious university abroad. The decision that János would study military engineering at the Academy of Engineering at Vienna was not taken without a lot of heartache and soul-searching but in the end this route was chosen as the least bad of the options. This is not to say that the Academy did not excel in teaching mathematics, for indeed the subject was emphasised throughout the course. János remained for one further year at Marosvásárhely College attempting to gain entry to the Academy at Vienna at the highest possible level which he achieved.

Around 1820, when he was still studying in Vienna, Bolyai began to follow the same path that his father had taken in trying to replace Euclid’s parallel axiom with another axiom which could be deduced from the others. In fact he gave up this approach within a year for still in 1820, as his notebooks now show, he began to develop the basic ideas of hyperbolic geometry. On 3 November 1823 he wrote to his father that he had:-

… created a new, another world out of nothing…

but he still added a few lines later that it was not created yet. By 1824, however, there is evidence to suggest that he had developed most of what would appear in his treatise as a complete system of non-Euclidean geometry. In early 1825 Bolyai travelled to home and explained his discoveries to his father. However Farkas Bolyai did not react enthusiastically which clearly disappointed János …

Bolyai’s work was published in 1832 in the Appendix to a mathematics textbook by his father Farkas Bolyai.

What was contained in this mathematical masterpiece?

Ancient geometry reached its apex in Euclid’s work, the Elements. It is a work in which Euclid sets up geometry on the basis of certain fundamental notions and simple assertions called axioms or postulates, while any further concept or theorem is logically deduced from these axioms. Euclid’s Postulate V. aroused the interest of mathematicians already in ancient times. Early mathematicians regarded that it was not “simple” and “clear” enough to satisfy the requirements of an axiom. Thus, they first tried to substitute it with simpler axioms. Later, the idea occured that Postulate V. might not be a fundamental truth at all, just a consequence of other axioms. Proving Postulate V. posed an important question, which concerned for centuries various mathematicians of the world.

János Bolyai was the first to build up a geometry, which neither affirms nor negates Postulate V., but it rather puts it aside: he interpreted parallelism in a way which can intertwine the possibilities of affirming and negating Postulate V. Accordingly, both Euclidean (the -system) and non-Euclidean geometry, or in other words hyperbolic geometry (the S-system) are special cases of the more general geometry Bolyai called absolute geometry. Bolyai’s great merit consisted in his invention of absolute geometry and, within it, hyperbolic geometry.

Absolute geometry widely and deeply influenced further investigations. It opened up the way for new developments, which, in turn, extended their scope beyond mathematics, influencing physics and other related sciences. However, its immediate influence was on the development of mathematics.

After setting up Bolyai’s own definitions of ‘parallel’ and showing that if the Postulate V held in one region of space it held throughout, and vice versa, he then stated clearly the different systems he would consider:

“… denote by Σ the system of geometry based on the hypothesis that Euclid’s Fifth Postulate is true, and by S the system based on the opposite hypothesis. All theorems we state without explicitly specifying the system Σ or S in which the theorem is valid are meant to be absolute, that is, valid independently of whether Σ or S is true.”

Most of the Appendix deals with absolute geometry. By 20 June 1831 the Appendix had been published for on that day Farkas Bolyai sent a reprint to Gauss who, on reading the Appendix, wrote to a friend saying:

“I regard this young geometer Bolyai as a genius of the first order.”

However, Gauss wrote the following, too:

“To praise it would amount to praising myself. For the entire content of the work … coincides almost exactly with my own meditations which have occupied my mind for the past thirty or thirty-five years.”

There is no doubt that Gauss was simply stating facts here. The clearest reference in Gauss’s letters to his work on non-euclidean geometry, which shows the depth of his understanding, occurs in a letter he wrote to Taurinus on 8 November 1824 when he wrote:

“The assumption that the sum of the three angles of a triangle is less than 180° leads to a curious geometry, quite different from ours [i.e. Euclidean geometry] but thoroughly consistent, which I have developed to my entire satisfaction, so that I can solve every problem in it excepting the determination of a constant, which cannot be fixed a priori. …. the three angles of a triangle become as small as one wishes, if only the sides are taken large enough, yet the area of the triangle can never exceed, or even attain a certain limit, regardless of how great the sides are.”

Bolyai discovered that Gauss had anticipated much of his work, however, greatly upset Bolyai who took it as a severe blow. He became irritable and a difficult person to get on with.

In 1848 Bolyai discovered not only that Lobachevsky had published a similar piece of work in 1829, but also a generalization of this theory. As far as we know, Lobachevsky published his work a few years earlier than Bolyai, but it contained only hyperbolic geometry. Bolyai and Lobachevsky didn’t know each other or each other’s works.

Eugenio Beltrami, and later Felix Klein and Henri Poincaré, found methods of exhibiting a model of a (non-Euclidean) plane of constant negative curvature in a Euclidean disk. These models did much to convince mathematicians that non-Euclidean geometry existed and was equally as consistent as Euclidean geometry.

All Bolyai-monographs unanimously assert: although János Bolyai tried his hand at a few problems in number theory, his investigations were not particularly successful. However, his manuscripts attest the opposite of all this. Bolyai had a keen interest in questions of number theory and he had several original ideas, with which he preceded many other mathematicians of later ages.

János Bolyai was also greatly interested in the solvability of algebraic equations. We can infer from his notes that for a long time he had tried in vain to prove the solubility of the equation of fifth degree, but later, realizing his error, also he got to the Ruffini-Abel theorem. He found the problem in the works of Gauss, Andreas von Ettingshausen (1796-1887), Joseph Luis Lagrange (1736-1813) and Farkas Bolyai.

Bolyai did not know about either Abel’s or his contemporary’s, Evariste Galois’s (1811-1832) works. The history of mathematics, in its turn, did not know that in the middle of the 19th century there was a Hungarian mathematician, who solved one of the most important algebraic problems.

“János Bolyai, more explicitly than Riemann, almost a century ahead of general relativity, pointed at a possible connection between gravity and geometry, proving thereby his deep insight into the understanding of the laws of nature.”
- Professor Zoltan Bay -

“Up to the present day, he is the greatest Hungarian mathematician, the creator of absolute geometry. The genius of the Hungarian people is embodied at the highest level in János Bolyai in the field of science.”
-Professor János Szentágothai -

American Mathematical Society, by Robert Osserman: János Bolyai, Non-Euclidean Geometry, and the Nature of Space , by Jeremy J. Gray that is still very much alive today

The Mathematical Association of America, by Victor J. Katz: János Bolyai, Non-Euclidean Geometry, and the Nature of Space
by Jeremy J. Gray

Wikimedia: House where the mathematician János Bolyai was born

Conferences.hu: JJános Bolyai Conference on Hyperbolic Geometry to commemorate the 200th anniversary of the birth of the world famous Hungarian geometer János Bolyai