“The high school my parents chose for me was the Lutheran Gymnasium in Budapest, one of the best schools in Hungary, with such distinguished alumni as John von Neumann and Eugene Wigner. I was very happy in this school and received a superb education. In 1937, the year I graduated from it, I won the First Prize in Mathematics at the Hungary-wide annual competition for high school students …
My parents owned a pharmacy in Budapest, which gave us a comfortable living. As I was their only child, they wanted me to become a pharmacist. But my own preference would have been to study philosophy and mathematics …
In 1946 I re-enrolled at the University of Budapest in order to obtain a Ph.D. in philosophy with minors in sociology and in psychology. As I got credit for my prior studies in pharmacy, I did get my Ph.D. in June 1947, after only one more year of course work and after writing a dissertation in philosophy.”
- John Harsanyi -

After a doctorate in philosophy in 1947 from Budapest University and a brief teaching appointment, he fled the increasingly Stalinist Hungary in 1950 to Australia with his wife-to-be, Anne Klauber. 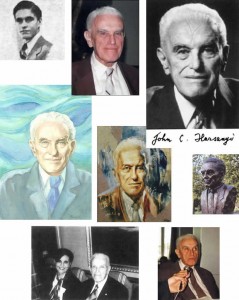 Evening courses at Sydney University – he worked in a factory during the day – brought him an MA in Economics in 1953, and a lectureship in Brisbane followed. In 1956 he went to Stanford University on a Rockefeller fellowship, where he got his PhD in Economics in 1959. He briefly returned to Australia until he emigrated to the United States, where he settled as Professor of Business Administration and Economics at the University of California, Berkeley, in 1964, remaining there until his retirement in 1990.

He is best known for his contributions to the study of game theory and its application to economics, specifically for his developing the highly innovative analysis of games of incomplete information, so-called Bayesian games.
In the early 1950s he published research papers on the use of von Neumann-Morgenstern utility functions in welfare economics.

He also made important contributions to the use of game theory and economic reasoning in political and moral philosophy, as well as contributing to the study of equilibrium selection.

In 1973 he showed that “almost all” mixed-strategy Nash equilibria can be reinterpreted as pure-strategy strict equilibria of a suitably chosen game with randomly fluctuating payoff functions.

Harsanyi published four books on his research of game theory: Rational Behavior and Bargaining Equilibrium in Games and Social Situations (1977), Essays on Ethics, Social Behavior, and Scientific Explanation (1976), Papers in Game Theory (1982), and A General Theory of Equilibrium Selection in Games (1988).

In 1994, three scientists: János Harsányi, John F. Nash and Reinhard Selten shared in the Nobel-prize in economics, each of them for the analysis of equilibrium in the non-co-operative games. (In its reasoning, the Nobel-prize Committee acknowledged the pioneer work done by János Neumann and Oscar Morgenstern in founding of game theory.)

“My interest in game-theoretic problems in a narrower sense was first aroused by John Nash’s four brilliant papers, published in the period 1950-53, on cooperative and on noncooperative games, on two-person bargaining games and on mutually optimal threat strategies in such games, and on what we now call Nash equilibria.”
- John Harsanyi -