Galamb finished his education in Budapest at the predecessor of the present-day Donát Bánki Technical College. After receiving his diploma in mechanical engineering he worked at the Steel Engineering Factory in Diósgyőr as a draftsman, then at the Hungarian Automobile Co., where he won a postgraduate scholarship to Germany. In 1903 he worked in many German cities as a skilled worker, he got the best education at Adler in Frankfurt. When he learned of the American Auto World Fair in St. Louis in 1904, he used his savings to travel to America by ship in October. He found employment as a toolmaker at the Westinghouse Corporation. 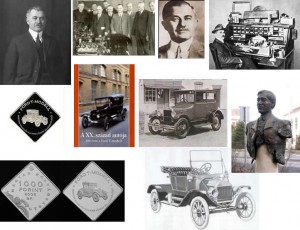 He joined the Ford Motor Company as a designer in December 1905. Subsequent to redesigning the cooling system for the Model N, he became the chief designer of the company, and devised many of the parts of the famous Model T. Ford’s Model-T became the first mass-produced car in the world. In the course of the 20 years following its premier in 1908, more than 15 million were produced. A significant part of the new constructional solutions making possible the mass production of the Model-T came from József Galamb. The extraordinary success of the Model-T was due to its relative low price, reliability and, last but not least, the fact that it was easy to drive.

During World War I, he designed ambulance vans and light tanks, prepared the production of Liberty aircraft engines.

From 1915 he worked on the Fordson tractor design. In 1921 he founded a scholarship for the poor students of his native town who wished to take up higher education at trade school. During World War I he was busy designing military hardware, e. g. anti-submarine detection systems.

In 1927, he designed the new and elegant Model A to replace the Model T.

From 1937 till his retirement in1945, he also managed the Ford car-body production division. He completed the design of a six-cylinder car on the basis of Ford’s idea. This type was used in England even in the 1950′s.

He visited Hungary many times, lecturing at the Association of Hungarian Engineers and Architects. During World War II on Ford’s suggestion, he designed a small six-cylinder car, which was completed in 1942. On doctor’s orders he retired from active work in 1944.
His influence played a role in the Ford V8 and Eifel being assembled in Hungary from 1935.