He was a Hungarian-German-American physicist who conceived the nuclear chain reaction and worked on the Manhattan Project. He was born in Budapest under the Austro-Hungarian Empire, and died in La Jolla, California.

In 1919 he resumed engineering studies at Budapest Technical University but soon decided to leave Hungary because of the rising antisemitism under the Horthy regime which led to the introduction of a numerus clausus for Jewish students at Hungary’s universities. He continued engineering studies at Technische Hochschule (Institute of Technology) in Berlin-Charlottenburg. He soon changed to physics there and took physics classes from Einstein, Planck, and Max von Laue. His dissertation on thermodynamics Über die thermodynamischen Schwankungserscheinungen (On The Manifestation of Thermodynamic Fluctuations) in 1922 was praised by Einstein and awarded the highest honor. In 1923 he received the doctorate in physics from the Humboldt University of Berlin. He was appointed as assistant to von Laue at the University of Berlin’s Institute for Theoretical Physics in 1924. 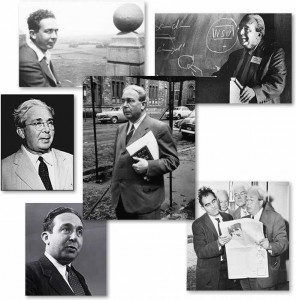 In 1933 Szilárd fled to London to escape Nazi persecution, where he read an article written by Ernest Rutherford in The Times which rejected the possibility of using atomic energy for practical purposes. Although nuclear fission had not yet been discovered, Szilárd was reportedly so annoyed at this dismissal that he conceived of the idea of the nuclear chain reaction.

In 1938 Szilárd accepted an offer to conduct research at Columbia University in Manhattan, and moved to New York, and was soon joined by Fermi.

Szilárd was directly responsible for the creation of the Manhattan Project. He drafted a confidential letter to Franklin D. Roosevelt explaining the possibility of nuclear weapons, warning of Nazi work on such weapons and encouraging the development of a program which could lead to their creation. In August 1939 he approached his old friend and collaborator Albert Einstein and convinced him to sign the letter, lending the weight of his fame to the proposal.

The Einstein-Szilárd letter led directly to the establishment of research into nuclear fission by the U.S. government and ultimately to the creation of the Manhattan Project; FDR handed the letter off to an aide, General Edwin M. “Pa” Watson with the instruction: “Pa, this requires action!” Later, Szilárd moved to the University of Chicago to continue work on the project. There, along with Fermi, he helped to construct the first “neutronic reactor”, a uranium and graphite “atomic pile” in which the first self-sustaining nuclear chain reaction was achieved, in 1942. This demonstration took place in the graphite block reactor built under the grandstand at the University of Chicago’s Stagg Field. This successful experiment was in part the result of Szilard’s atomic theories.

Throughout the Manhattan project, Szilard was often frustrated by cumbersome government administration and security regulations. Like other scientists involved in the project, he felt uneasy about the dominant role played by the military in the project. Many of his memoranda from the period reflect these concerns. Szilard viewed the production of the atomic bomb as a necessary counter-measure to the possibility of German nuclear development and deployment, but he foresaw the global consequences of the proliferation of this weapon. After Germany surrendered, Szilard organized his colleagues to press for limitations in the use of the atomic bomb. He drafted a letter to President Roosevelt urging restraint in the use of the bomb, but the President died before the letter could be delivered. In the spring of 1945, Szilard influenced a group of scientists to produce the Franck Report, which outlined the dangers of a nuclear arms race. The report advised against the use of an atomic bomb against Japanese civilians, advocating instead a non-combat demonstration. 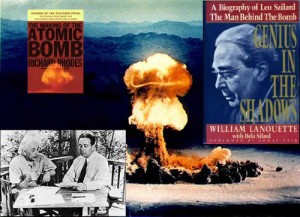 In July 1945 Szilard circulated a petition urging President Truman not to drop the atomic bomb on Hiroshima. A revised version of this petition was eventually signed by 68 scientists at the Metallurgical Laboratory. It was strongly opposed by General Groves, head of the Manhattan Project, on the grounds that such a petition would breach security and expose the existence of the atomic bomb.

The petition did not reach the president.

In Chicago Szilard collaborated with Aaron Novick to develop the “chemostat,” a device for “maintaining a multiplying population of bacteria under conditions not changing in time.” Numerous articles resulted from his research, including “Experiments with the chemostat on spontaneous mutation of bacteria”, “Anti-mutagens”, and “On the nature of the aging process”. Szilard’s theory of aging, a major outgrowth of his research, became a continuing interest in his later life. Much of Szilard’s research funding came from contracts and grants with organizations such as the National Advisory Health Council and the Office of Naval Research.

In his lectures he advocated nuclear arms control, world government, and an elite leadership role for the international scientific community. Many of his ideas were inspired by the works of H.G. Wells, which he had read avidly as a young man. Wells’s book The World Set Free (London, 1914), which had predicted the development of atomic power, had made a great impression on Szilard when he read it in 1932.

In 1947, Szilard published a “letter to Stalin” in the Bulletin of the Atomic Scientists. In the letter he urged world leaders to openly exchange ideas in an effort to mitigate the growing Cold War. In his appeal he took a balanced view of the peace process, blaming neither the U.S. or the Soviet Union for the situation. In the late 1950s Szilard’s ideas inspired Albert Einstein and Bertrand Russell to organize an international conferences of concerned scientists. The first conference took place at Pugwash, Nova Scotia in 1957, and subsequent conferences, named after the location of the first meeting, have been held throughout the world since then.

After 1958, with the increasing threat of nuclear war, Szilard’s political activities intensified. Between October 1959 and October 1960 he carried on a series of interactions with Soviet Premier Nikita Khruschev which culminated in a two hour interview in New York. Szilard proposed the development of a Moscow-Washington “hot line,” which could facilitate communications between super-power leaders in the interest of global peace. With the election of President Kennedy, Szilard moved to Washington, D.C., taking up residence at the DuPont Plaza Hotel. He criticized Kennedy’s handling of the Bay of Pigs debacle and the President’s bomb shelter program. Szilard offered to personally intercede with Khruschev during the Berlin Crisis in 1961.

Throughout the early 1960s Szilard continued his advocacy of global cooperation. In 1961 he began a lecture tour which would take him to eight college campuses. His first lecture, at the Harvard Law School Forum on November 17, 1961, was entitled “Are We on the Road to War?” From these and other efforts came an organization known as the Council for a Livable World, a political action committee which encouraged members to donate two percent of their income to designated political candidates. In 1962, Szilard attempted unsuccessfully to organize informal meetings between lesser officials of both the United States and the Soviet Union in what he termed the “Angels Project.”

In 1960, Szilárd was diagnosed with bladder cancer. He underwent radiation therapy at New York’s Memorial Hospital using a treatment regimen that he designed himself. A second round of treatment followed in 1962; Szilárd’s cancer remained in remission thereafter.

1960: Szilard wrote extensively during this period. He suggested rules for nuclear age living in “How to Live with the Bomb and Survive”.
1961: He wrote a futuristic work of fiction entitled The Voice of the Dolphins. In this work Szilard had the dolphins describe the debacle of human society, out of which they have inherited the earth.

He carried on his writing during two courses of radiation treatments for bladder cancer in 1960 and 1962. While undergoing these treatments in New York City’s Memorial Hospital, Szilard also made an extensive series of tape recordings relating to his life and his involvement in the Manhattan project.

Szilard moved to La Jolla in February 1964. There he intended to work in biophysics as a Resident Fellow of the Salk Institute. But three months later, on May 30, 1964, he died of a heart attack. 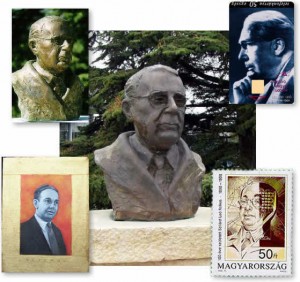 Szilard lived a peripatetic life. After leaving Budapest in 1919 he had no true permanent residence. He stayed mostly in hotels, and his associations with various universities were usually tenuous. Because he had no long-term institutional affiliations, Szilard had difficulty in marshalling the material forces – such as a clerical and laboratory staff – needed to follow through on many of his important ideas. Szilard was essentially a thinker, and he preferred to leave for others the tasks involved in implementing his ideas.

“Pronouncement of experts to the effect that something cannot be done has always irritated me.”

“If one knows only what one is told, one does not know enough to be able to arrive at a well-balanced decision.”

“A scientist’s aim in a discussion with his colleagues is not to persuade, but to clarify.”

Gábor Palló: To save the world: Szilárd’s biology and philosophy