From 1880, he attended the Technische Hochschule in Vienna for one year and, then, he studied at the Budapest University of Science. After a short break, he continued his studies in Heidelberg and obtained his doctorate in 1886. He attended the lectures of Bunsen, Helmholtz, Königsberger and Quincke. Having graduated, he worked as an assistant of Quincke. Then, he also worked in Breslau and Aachen for short time and had the opportunity to get acquainted with the most important physicists of the then Germany. 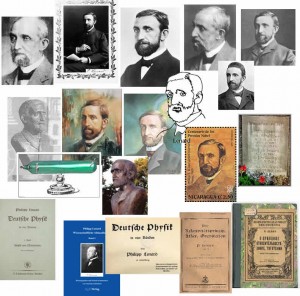 In 1888, when he was working at Heidelberg under Quincke, Lenard had done his first work with cathode rays. He investigated the view then held by Hertz that these rays were analogous to ultraviolet light and he did an experiment to find out whether cathode rays would, like ultraviolet light, pass through a quartz window in the wall of a discharge tube. He found that they would not do this; but later, in 1892, when he was working as an assistant to Hertz at the University of Bonn, Hertz called him to see the discovery he had made that a piece of uranium glass covered with aluminium foil and put inside the discharge tube became luminous beneath the aluminium foil when the cathode rays struck it. Hertz then suggested that it would be possible to separate, by means of a thin plate of aluminium, two spaces, one in which the cathode rays were produced in the ordinary way and the other in which one could observe them in a pure state, which had never been done. Hertz was too busy to do this and gave Lenard permission to do it and it was then that he made the great discovery of the “Lenard window”.

After many experiments with aluminium foil of various thicknesses he was able to publish, in 1894, his great discovery that the plate of quartz that had, until then, been used to close the discharge tube, could be replaced by a thin plate of aluminium foil just thick enough to maintain the vacuum inside the tube, but yet thin enough to allow the cathode rays to pass out. It thus became possible to study the cathode rays, and also the fluorescence they caused, outside the discharge tube and Lenard concluded from the experiments that he then did that the cathode rays were propagated through the air for distances of the order of a decimetre and that they travel in a vacuum for several metres without being weakened. Although Lenard at first followed Hertz in believing that the cathode rays were propagated in the ether, he later abandoned this view as a result of the work of Jean Perrin in 1895, Sir J.J. Thomson in 1897 and W. Wien in 1897, which proved the corpuscular nature of the cathode rays.

A few European scientists briefly looked into the nature of raindrops in the 1800s. The most prominent was Philipp Lenard. Lenard began studying at raindrops in 1898. At the same time as Lenard began his work on raindrops, investigations of raindrop size were also taking place across the Atlantic on the farm of Wilson A. Bentley, a farmer/scientist best known for his photography of snow crystals. It also appears Lenard was not aware that E.J. Lowe (1892) and J. Wiesner (1895) had made the first measurements of raindrop size a few years previous. Nor was he aware of the work being undertaken by Bentley.

Lenard published the results of his extensive investigation in June 1904 (four months before Bentley would published his findings) in a paper titled Uber Regen in the German journal Meteorologische Zeitschrift. It presents his work on the shape, size and stability of raindrops during their descent from clouds.
Although Lenard’s paper reported many major insights into the shape, size and stability of raindrops, his work, like that of Bentley, was virtually ignored by contemporaries and only years later was he eventually credited for his contribution when other researchers re-discovered his findings. And like Bentley, there was no encore to Lenard’s 1904 paper. Neither ever published on this topic again. In part it was due to a lack of interest in the atmospheric sciences in the sub- processes of rain.

But perhaps had Lenard not shifted his interest to other problems in physics, his prestige in the academic world may have forced others to look further into the subject of raindrops. Lenard would only publish one more paper related to atmospheric phenomena in his lifetime. Published in 1915, it dealt with the electrification produced by the splashing and breaking of water drops during free fall.

Go back to the physics. Lenard extended the work of Hertz on the photoelectric effect. Working in a high vacuum, he analysed the nature of this effect, showing that when ultraviolet light falls on a metal it takes from the metal electrons which are then propagated in the vacuum, in which they can be accelerated or retarded by an electric field, or their paths can be curved by a magnetic field. By exact measurements he showed that the number of electrons projected is proportional to the energy carried by the incident light, whilst their speed, that is to say, their kinetic energy, is quite independent of this number and varies only with the wavelength and increases when this diminishes.

These facts conflicted with current theory and were not explained until 1905, when Einstein produced his quantitative law and developed the theory of quanta of light or photons, which was verified much later by Millikan. But Lenard never forgave Einstein for discovering and attaching his own name to this law.

In 1902, he alone continued the work started with Hertz and recognised that the energy of electrons emerging from metals under the effect of light is proportional to the frequency of light while their number is proportional to the light intensity. He pointed out that, in order for the electrons to emerge, the frequency of light should exceed a specific limit value. His results were reassessed by Einstein, who recognised the quantum-nature of light and developed the photoelectric equation using Lénárd’s results.

Lenard did important work on cathode rays (electrons) for which he received the Nobel Prize for physics in 1905. He demonstrated how they could be induced to leave the evacuated tube in which they were produced, penetrate thin metal sheets, and travel a short distance in the air, which would become conducting. On the basis of this work he proposed a model of the atom in which it is made from ‘dynamids’, units of positive and negative charge.

He only course for him was to develop a non-Jewish physics and to this end he produced a curious four-volume work, Deutsche Physik (1936–37; German Physics). Faced with the objection that science is international he replied, “It is false. Science like every other human product is racial and conditioned by blood.” The atmosphere produced by Lenard did much to cause the general exodus of scientists from Germany and to destroy creative science there for a generation.

Just why Lenard was transformed from a talented experimentalist into a bigoted and almost pathological crank is not clear. Germany’s losing the war followed by the death of his son and the loss of all his savings in the postwar inflation no doubt contributed, but the ultimate source seems to have been his distaste, as an experimentalist, for the increasing mathematical abstraction introduced into physics by such scientists as Einstein.

The incident served to crystallize Lenard’s belief that his country was becoming clearly divided by ideology, and he wholeheartedly threw his support to conservative side – the emerging Nazi Party, which called for the removal of Jews from German political, social, and cultural institutions. When Nazi Party leader Adolf Hitler began serving a jail sentence in April of 1924 for a failed coup in Munich known as the Beer Hall Putsch, Lenard penned an article for a Bavarian newspaper, Grossdeutsche Zeitung, commending Hitler. He asserted that the Nazis “appear to us as gifts of God from a long darkened earlier time when races were still purer, persons still greater, spirits still less fraudulent.”

It is known that Hitler and his deputy, Rudolf Hess, later paid a visit to Lenard at his Heidelberg home in 1928. When Hitler became chancellor in 1933, Lenard wrote him and offered his services as scientific advisor to the new Reich. In the letter, he suggested that the esteemed German university system was unduly riddled with Jewish influence. By then he had retired from the University of Heidelberg, and in 1935 its physics institute was renamed in his honor in 1935. He was the recipient of several other official honors, including the Eagle Shield of the Reich, but his actual role in guiding Nazi policy during the 1933 – 45 era was negligible. At World War II’s end and the defeat of Hitler, Allied authorities discussed subjecting him to a denazification trial, but a rector at the university intervened. Lenard was in his early eighties by then, and spent the remaining years of his life in a nearby town called Messelhausen, where he died on May 20, 1947.

The cathode – ray research Lenard conducted early in his career helped pave the way for the cathode ray tube, or CRT, which was the essential element in the development of television. The CRT was standard in the television manufacturing industry for nearly 50 years after Lenard’s death, until it was replaced by liquid – crystal display technology. In the end, however, Lenard’s scientific legacy was tarnished by his support for “Aryan physics” and “German science,” which rejected foreign influence on German research and progress. He dismissed the standard notion that science is an international activity where nationalism has no place. In the 1936 textbook he wrote, Deutsche Physik (German Physics), he asserted instead that “science, like everything man produces, is racially determined, determined by blood.”

The Weather Doctor: Philipp Lenard, Brushing the Teardrops
from Rain