Last winter we placed some bird food in a small bowl to the balcony (see Figure 1). As the wintry time has come the birds become regular visitors at us.

This winter, we thought it would be a little bit improve the quality and I made a new bird house (see Figure 2). We were excite how birds will like the new situation. The result surpassed all our expectations. The birds very quickly discovered their new cottage. At the first time they approached with caution, carefully flew around and then flew away. Then, soon they became an every day visitors. Especially when a small nutmeat were also on the menu!

Regularly come blue tits, thrushes, sparrows. Sometime there is one, sometime six or more at the same time! If an oriole settles in the cottage, the little birds easily frightened him, and as soon as noticed quickly flew away. But there was already an opposite example, too when two blue tits were in the bird house, and so fiercely defended their house that the oriole had to fly away and could go to the cottage only in a later time.

There are some birds who are so safe they feel that they sit to the bird house or in its window or on the bough and they are eating the food. Another ones only fly into the cottage to the bowl, get a small food and fly away right off …

Unfortunately the birds do not have detailed knowledge of the civilized eating.

They often throw down or flop pieces of food to the ground, in a few minutes they could produce a huge mess.

This is why a small mouse came up on the balcony and started to eat the bird food.
Tiny and cute.
As long as there is out there!
But in the flat wouldn’t be a welcome guest. 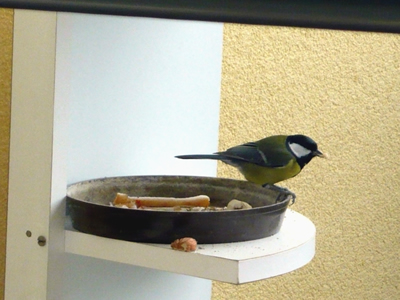 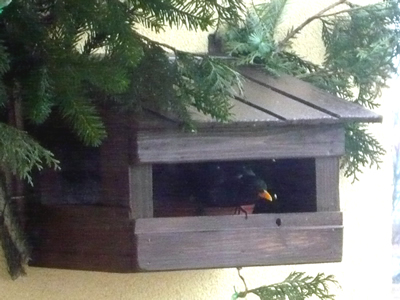 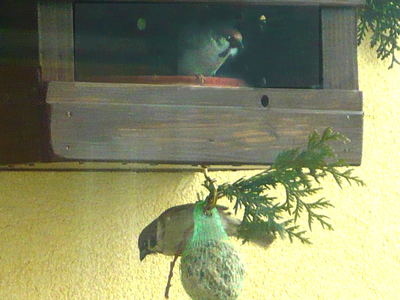 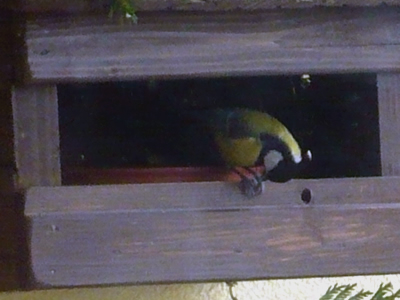