Do you know what is OLED? 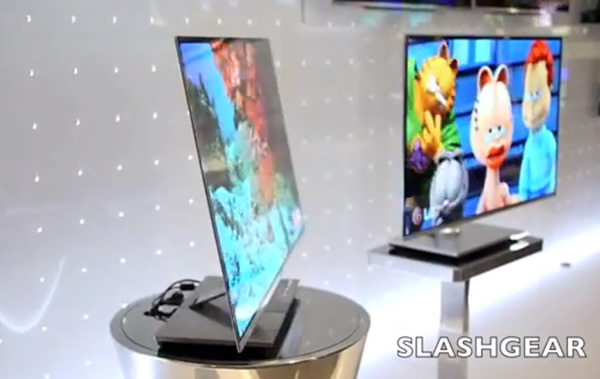 What is the OLED?

Organic Light Emitting DiodesOrganic Light-Emitting Diode technology, also abbreviated OLED, is relatively new but very promising, especially what concerns design of data display devices. OLEDs’ main difference from other LEDs is that they are made of organic compounds which emit light in response to an electric current. This feature determines their main properties.OLEDs are made of special thin-film multilayer structures. These layers are special polymers. There is anode and cathode. Electrons can flow between them. When positive voltage is applied to the anode then electrons from the cathode start moving towards it. That means that the cathode emits them into the emissive layer while the anode gets them from a conductive layer …

OLED is a light-emitting diode (LED) in which the emissive electroluminescent layer is a film of organic compounds which emit light in response to an electric current. This layer of organic semiconductor material is situated between two electrodes. Generally, at least one of these electrodes is transparent.
There are two main families of OLEDs:
- those based on small molecules and
- those employing polymers.
Adding mobile ions to an OLED creates a Light-emitting Electrochemical Cell or LEC, which has a slightly different mode of operation. OLED displays can use eitherpassive-matrix (PMOLED) or active-matrix addressing schemes. Active-matrix OLEDs (AMOLED) require a thin-film transistor backplane to switch each individual pixel on or off, but allow for higher resolution and larger display sizes. It is important that an OLED display works without a backlight, so it can display deep black levels and can be thinner and lighter than liquid crystal displays(LCDs). In low ambient light conditions such as dark rooms an OLED screen can achieve a higher contrast ratio than an LCD, whether the LCD uses either cold cathode fluorescent lamps or the more recently developed LED backlight. Due to their low thermal conductivity, they typically emit less light per area than inorganic LEDs.
OLEDs can be used in television set screens, computer monitors, small, portable system screens such as mobile phones and PDAs, watches, advertising, information, and indication. OLEDs are also used in large-area light-emitting elements for general illumination .. more information.

Organic Light Emitting Diode technology, pioneered and patented by Kodak/Sanyo, enables full color, full-motion flat panel displays with a level of brightness and sharpness not possible with other technologies. Unlike traditional LCD’s, OLED’s are self-luminous and do not require backlighting, diffusers, polarizers, or any of the other baggage that goes with liquid crystal displays. Essentially, the OLED consists of two charged electrodes sandwiched on top of some organic light emitting material. This eliminates the need for bulky and environmentally undesirable mercury lamps and yields a thinner, more versatile and more compact display. Their low power consumption provides for maximum efficiency and helps minimize heat and electric interference in electronic devices. Armed with this combination of features, OLED displays communicate more information in a more engaging way while adding less weight and taking up less space. There are two forms of OLED displays: Passive-matrix and Active-matrix … more information.

OLED Info is the web’s leading resource on OLED TVs, displays and lighting

Colors So Rich and Bold, You Won’t Believe Your Eyes

Organic light emitting diodes are a relatively new technology for solid state light sources. A typical OLED consists of two organic layers (electron and hole
transport layers), embedded between two electrodes. The top electrode is usually a metallic mirror with high reflectivity and the bottom electrode a transparent ITO layer on top of the glass substrate …

The State of Delaware has bust out a grant of $920,000 for DuPont’s obsessed project to bring OLED TVs to the masses. It’s building a facility at the Stine-Haskell Research Center in Newark with the chemicals-giant stumping $30 million out of its own back pocket. The new unit will employ 35 people to investigate the possibility of producing Organic Light Emitting Diodes for use in televisions for a fraction of the current cost. In comparison, the OLED TVs we saw at CES could retail for as much as $10,000, enough to make sure you don’t ask Grandma for one next Christmas …

How works the OLED technology?

A Layer of organic material is sandwiched between two conductors (an anode and a cathode), which in turn are sandwiched between a glass top plate (seal) and a glass bottom plate (substrate). When electric Current is applied to the two conductors, a bright, electro-luminescent light is produced directly from the organic material. Organic light emitting diodes have been receiving a lot of attention over the world as a new type of display technology. OLEDs have many advantages over conventional display technologies. First, the fabrication process is easy, and devices are thinner and lighter than those fabricated by cathode ray tube (CRT) display technology …