Find the isosceles triangle of a given perimeter K which has the greatest area. 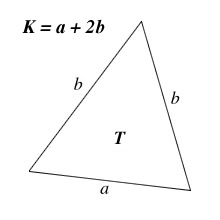 Solution:
It is possible to use often the Inequalities between means for resolving maximalization tasks. The arithmetic-geometric mean inequality for the nonnegative a and b numbers is:

We can make sure of the correctness of this very easy to square and arrange the inequality. It can also be see and this is an important thing: that equality holds if and only if the two numbers are equal.

Let us look at a simple application. When will be the largest one the product of two positive numbers if we know that the sum of them is 2?

Among others Frigyes Riesz and György Pólya provided very nice proof of arithmetic-geometric mean inequality for any list of n nonnegative real numbers.

The perimeter of the triangle in the task:

and its area is:

Since the values of area is positive, so it will be a maximum when its square it is:

Here, the right part has been created so that we can apply the arithmetic-geometric mean inequality. If the triangle exists, then the following numbers are positive:

From this we can read the maximum value of the area, which is when 4 above numbers are equal to each other, that is when a = b, so the triangle is regular.