He is a Hungarian-American businessman and scientist.
He was one of the earliest employees of Intel Corporation and ultimately played key leadership roles in its success.

Grove was born to a middle-class Jewish family in Budapest, Hungary. At the age of four, Andrew was diagnosed with scarlet fever. The disease was nearly fatal, and while he survived, he suffered significant hearing loss as a result.
During the Hungarian Revolution of 1956 he left his home and family and emigrated to the United States, to New York City.

Grove and his wife Eva were married in 1958. They have two daughters.

In July 1968, Dr. Grove participated in the founding of Intel Corporation. In 1979 he was named its President, and in 1987 he was named Chief Executive Officer. In May 1997 he was named Chairman and CEO, and in May 1998 he relinquished his CEO title. He stepped down as Chairman in May 2005, and remains Senior Advisor. 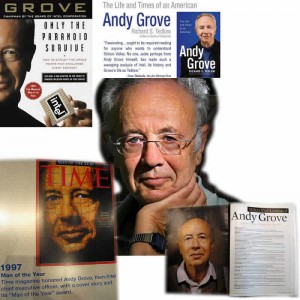 Grove is credited with having transformed Intel from a manufacturer of memory chips into one of the world’s dominant producers of microprocessors. During his tenure as CEO, Grove oversaw a 4,500% increase in Intel’s market capitalization from $18 billion to $197 billion, making it, at the time, the world’s most valuable company. He relinquished his CEO title in May 1998 and remained Chairman of the Board until November 2004.

And so TIME chooses as its 1997 Man of the Year Andrew Steven Grove, chairman and CEO of Intel, the person most responsible for the amazing growth in the power and innovative potential of microchips. His character traits are emblematic of this amazing century: a paranoia bred from his having been a refugee from the Nazis and then the Communists; an entrepreneurial optimism instilled as an immigrant to a land brimming with freedom and opportunity; and a sharpness tinged with arrogance that comes from being a brilliant mind on the front line of a revolution.

As the transistor was being invented, George Orwell, in his book 1984, was making one of the worst predictions in a century filled with them: that technology would be a centralizing, totalitarian influence. Instead, technology became a force for democracy and individual empowerment. The Internet allows anyone to be a publisher or pundit, E-mail subverts rigid hierarchies, and the tumult of digital innovation rewards wildcats who risk battle with monolithic phone companies. The symbol of the atomic age, which tended to centralize power, was a nucleus with electrons held in tight orbit; the symbol of the digital age is the Web, with countless centers of power all equally networked.

Grove first book, Physics and Technology of Semiconductor Devices has been used at many leading universities in the United States. His books on managing include High Output Management (1983), One-on-One With Andy Grove (1987), Only the Paranoid Survive (1996), and Strategic Dynamics: Concepts and Cases, co-authored by Robert A. Burgelman, (2005).

Grove believes that the confluence of oil prices, environmental concerns and economic conditions now demand a rapid move from internal combustion to electrically driven vehicles. Grove is now pushing to find a way to retrofit the tens of millions of older vehicles on the road with hybrid drive systems. Grove is pushing for tax incentives to help fund battery and conversion kit development.

Dr. Grove has written over 40 technical papers and holds several patents on semiconductor devices and technology. He taught a graduate course in semiconductor device physics at the University of California, Berkeley for six years. He currently is a lecturer at the Stanford University Graduate School of Business, teaching a course entitled “Strategy and Action in the Information Processing Industry”.

In 1998 Dr. Grove was named “Distinguished Executive of the Year” by the Academy of Management, and received the IEEE 2000 Medal of Honor award in 2000.

“When TV first came, people tried to look at it as a radio with pictures. We’re at the stage now where the Internet is TV with poor connections.”
- Andrew Grove -

“Just as you would not permit a fellow employee to steal a piece of office equipment, you shouldn’t let anyone walk away with the time of his fellow managers.”
- Andrew Grove -

“Technology is not inherently good or evil. It is only a tool for reflecting our values.”
- Andrew Grove -