“My life-long love of physics started suddenly at the age of 15. I could not wait until I got to the university, I learned the calculus and worked through the textbook of Chwolson, the largest at that time, in the next two years. I remember how fascinated I was by Abbe’s theory of the microscope and by Gabriel Lippmann’s method of colour photography, which played such a great part in my work, 30 years later. ”
- Dennis Gabor - 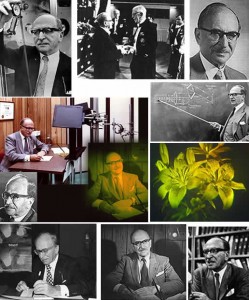 “Yet, when I reached university age, I opted for engineering instead of physics. Physics was not yet a profession in Hungary, with a total of half-a-dozen university chairs – and who could have been presumptious enough to aspire to one of these?”
- Dennis Gabor -

At the start of his career, he analyzed the properties of high voltage electric transmission lines by using cathode-beam oscillographs, which led to his interest in electron optics. Studying the fundamental processes of the oscillograph, Gabor was led to other electron-beam devices such as electron microscopes and TV tubes.

Having fled from Nazi Germany in 1933, Gabor was invited to Britain to work at the development department of the British Thomson-Houston company in Rugby.

“In 1933, when Hitler came to power, I left Germany and after a short period in Hungary went to England. At that time, in 1934, England was still in the depths of the depression, and jobs for foreigners were very difficult. ”
- Dennis Gabor -

Gabor invented holography, in 1947. Gabor’s research focused on electron optics, which led him to the invention of holography. The basic idea was that for perfect optical imaging, the total of all the information has to be used; not only the amplitude, as in usual optical imaging, but also the phase. In this manner a complete holo-spatial picture can be obtained.
Gabor, who characterized his work as “an experiment in serendipity,” coined the term hologram from the Greek words holos, meaning “whole,” and gramma, meaning “message.”

Gabor also researched how human beings communicate and hear; the result of his investigations was the theory of granular synthesis, although Greek composer Iannis Xenakis claimed that he was actually the first inventor of this synthesis technique.

At the time Gabor developed holography, coherent light sources were not available, so the theory had to wait more than a decade until its first practical applications were realized,

In 1948 Gabor moved from Rugby to Imperial College London, and in 1958 became professor of Applied Physics until his retirement in 1967.

After 1960s following the rapid development of lasers and a wide variety of holographic applications Gabor achieved acknowledged success and worldwide attention during his lifetime. A laser produces nearly coherent light and was found to be ideal for making crisp, clear holographic images. Over the past three decades a number of other
mediums, such as x-rays, have been used to create holographic images. A beam of coherent x-rays can be used to view particles the size of only one or two atoms.

In 1971 Dr. Dennis Gabor was awarded the Nobel Prize in Physics for his discovery of holography in 1947. 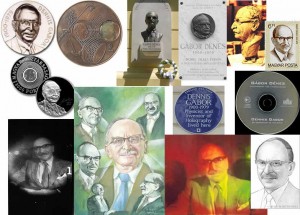 “The most important and urgent problems of the technology of today are no longer the satisfactions of the primary needs or of archetypal wishes, but the reparation of the evils and damages by the technology of yesterday.”
- Dennis Gabor -