was born in 1928 in the town of Sighet, in Transylvania, now part of Romania, where people of different languages and religions have lived side by side for centuries, sometimes peacefully, sometimes in bitter conflict. The region has long been claimed by both Hungary and Romania and, in the 20th century, has changed hands repeatedly, a hostage to the fortunes of war. 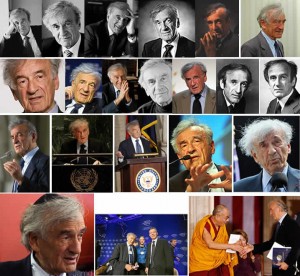 During World War II, he, with his family and other Jews from the area, were deported to the German concentration and extermination camps, where his parents and little sister perished.
In March 1944, German soldiers occupied Sighet. They forced the Jews to wear yellow stars. The Nazis closed Jewish stores, raided their houses and created two ghettos. In May, deportations began. The Wiesel’s Christian maid, Maria, invited them to hide in her hut in the mountains, but they turned her down, preferring to stay with the Jewish community. In early June, the Wiesels were among the last Jews to be loaded into a cattle car, with eighty people in one car. Wiesel later wrote, “Life in the cattle cars was the death of my adolescence.”.

After four days, the train stopped at Auschwitz. Wiesel, then 15, followed the instructions of a fellow prisoner and told the waiting SS officer that he was eighteen, a farmer and in good health. He and his father were sent to be slave laborers. His mother and younger sister were taken to the gas chambers. Wiesel and his father survived first Auschwitz and then the Buna labor camp for eight months, enduring beatings, hunger, roll calls and other torture. Wiesel witnessed hangings and once, a “trial” by three religious rabbis against God. Yet he still prayed every day. Like other inmates, Wiesel was stripped of his identity and became identified only by his number: A-7713.

In the winter of 1944-1945, Wiesel’s right knee swelled up. He went to a camp doctor who operated on him. Two days later, on January 19, the SS forced the inmates of Buna on a death march. For ten days, the prisoners were forced to run and, at the end, were crammed into freight cars and sent to Buchenwald. Of the 20,000 prisoners who left Buna, 6,000 reached Buchenwald. Upon arrival on June 29, Wiesel’s father, Shlomo, died of dysentery, starvation and exhaustion.

Wiesel was sent to join 600 children in Block 66 of Buchenwald. As the end of the war approached, on April 6, 1945, the guards told the prisoners they would no longer be fed, and began evacuating the camp, killing 10,000 prisoners a day. On the morning of April 11, an underground movement rose from within the camp and attacked the SS guards. In early evening, the first American military units arrived and liberated the camp.

After liberation, Wiesel became sick with intestinal problems and spent several days in a hospital. While hospitalized, he wrote the outline for a book describing his experiences during the Holocaust. He was not ready to publicize his experiences, however, and promised himself to wait 10 years before writing them down in detail.

After the war, the teenaged Wiesel found asylum in France, where he learned for the first time that his two older sisters had survived the war. Wiesel mastered the French language and studied philosophy at the Sorbonne, while supporting himself as a choir master and teacher of Hebrew. He became a professional journalist, writing for newspapers in both France and Israel.

In 1958, he published his first book, La Nuit, a memoir of his experiences in the concentration camps. He has since authored nearly thirty1 books some of which use these events as their basic material. In his many lectures, Wiesel has concerned himself with the situation of the Jews and other groups who have suffered persecution and death because of their religion, race or national origin. He has been outspoken on the plight of Soviet Jewry, on Ethiopian Jewry and on behalf of the State of Israel today2. 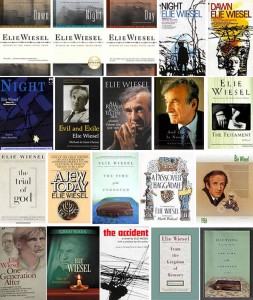 Wiesel has made his home in New York City, and is now a United States citizen. He has been a visiting scholar at Yale University, a Distinguished Professor of Judaic Studies at the City College of New York, and since 1976 has been Andrew W. Mellon Professor in the Humanities at Boston University where he teaches “Literature of Memory.” In 1978, President Jimmy Carter appointed Elie Wiesel Chairman of the United States Holocaust Memorial Council. Chairman of the United States Holocaust Memorial Council from 1980 – 1986, Wiesel serves on numerous boards of trustees and advisors. In 1985 he was awarded the Congressional Medal of Freedom and, in 1986, the Nobel Prize for Peace. The English translation of his memoirs appeared in 1995 as All Rivers Run to the Sea. 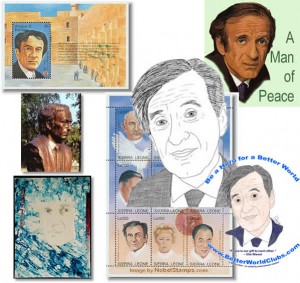 He has written plays including Zalmen, or the Madness of God and The Trial of God (Le Proces de Shamgorod ). His other novels include The Gates of the Forest, The Oath, The Testament, and The Fifth Son. His essays and short stories are collected in the volumes Legends of Our Time, One Generation After, and A Jew Today. Although Wiesel still writes his books in French, his wife Marion now collaborates with him on their English translation.

“I spent most of my time talking to God more than to people. He was my partner, my friend, my teacher, my King, my sovereign, and I was so crazily religious that nothing else mattered.”
- Elie Wiesel -

“Oh, from time-to-time we had anti-Semitic outbursts. Twice a year, Christmas and Easter, we were afraid to go out because those nights we used to be beaten up by hoodlums. It didn’t matter that much. In a way, I was almost used to that. I saw it as part of nature. It’s cold in the winter, it’s hot in the summer and at Easter and Christmas you are being beaten up by a few anti-Semitic hoodlums.”
- Elie Wiesel -

The Boston Globe: Wiesel, Walesa at Auschwitz proclaim right not to suffer