After matriculating at the Gymnasium of the Piarist Order in 1903 he studied at Budapest University and Berlin Technical University.
There he came in contact with Ludwig Gattermann. In 1906 he started his PhD thesis with Georg Franz Julius Meyer. In 1908 he got a position at the ETH. 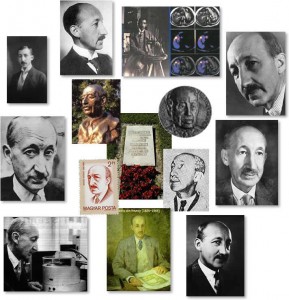 He travelled to England in 1910 to study under Professor Ernest Rutherford at Manchester. He interrupted early in 1913 his studies to carry out jointly with Frederic Paneth the first radioactive-tracer experiment at the Vienna Institute of Radium Research.

During his stay in Vienna he obtained the Venia Legendi in the University of Budapest. In 1915 he was drafted into the Austrian-Hungarian Army. After the end of the war he was teaching for 6 months in the University of Budapest and left the spring of 1919 for Copenhagen to discuss his future activities at Niels Bohr’s Institute which was to be erected. In 1920 he settled in Copenhagen.

Six years later he returned to Freiburg as Professor of Physical Chemistry. In 1930 he was appointed Baker Lecturer at Cornell University, Ithaca. Four years later he took up again his activities at Niels Bohr’s Institute which he terminated in 1952. He was domiciled in Stockholm since 1943 and was an Associate of the Institute of Research in Organic Chemistry. In 1949 he was elected Franqui Professor in the University of Ghent. In his retirement, he remains an active scientific associate of the University of Stockholm.

His early investigations involved a study of the chemical behaviour of molten salts and his introduction to practical radiochemistry came in Rutherford’s laboratories at Manchester. His work there, and later in Vienna and Budapest, mainly concerned the investigation and use of radium and lead isotopes.

In 1923 he was a co-discoverer of Hafnium (Latin Hafnia for “Copenhagen”, the home town of Niels Bohr), with Dirk Coster, validating the original 1869 prediction of Mendeleev.

He was responsible for pioneer work in the use of isotopic indicators both in inorganic and life sciences and later, in Freiburg, he was involved in the first clinical use of isotopes. On his return to Copenhagen, he demonstrated the formation of new artificially radioactive isotopes and subsequently introduced a method of activation analysis based on neutron bombardment of the element to be investigated. This method was to replace X-ray analysis with fluorescent X-rays which he introduced during his stay in Freiburg. The year 1934 saw the beginning of numerous investigations in the field of plant and animal physiology, using labelled atoms: these researches were supported by generous grants made by the Carlsberg Foundation, the Rask-Ørsted Foundation, the Rockefeller Foundation and others. His work in Sweden has continued on the same lines and he has studied, amongst other things, the effect of X-rays on the formation of nucleic acid in tumours and in normal organs, and iron transport in healthy and cancerous organisms; this work is supported by the Swedish State Research Council and the Wallenberg Foundation.

The Nobel Prize for research related directly to chemical dynamics was awarded to George de Hevesy in 1943 “for his work on the use of isotopes as tracers in the study of chemical processes”. de Hevesy’s interest in isotopes stemmed from his work with Ernest Rutherford in Manchester when they found that it was impossible to separate various lead isotopes resulting from the radioactive decay of radium. This led de Hevesy to the conclusion that if isotopes could not be separated by ordinary chemical means, then isotopes could be used as tracers in research on chemical and physiological processes. Isotope tracers have been extremely valuable tools in research into chemical reaction dynamics in the second half of the 20th century. Isotopes of the same chemical element have identical chemical characteristics. Using radioactive isotopes of a chemical element, George de Hevesy showed that radiation made it possible to follow the atoms through a long series of reactions. This was something that could be achieved by no other methods of analysis. Among other things, he showed how isotopes of phosphorus quickly entered the blood and then spread to various parts of the body. Sensitive methods for measuring radioactivity made it possible to, after some time, even find small traces of isotopes in dental enamel.

George de Hevesy married Pia Riis in 1924. They had one son and three daughters.

Professor de Hevesy is the author of several important books on radiochemistry and his many scientific papers are valuable and accurate records of devoted work. He was awarded the Cannizaro Prize (Academy of Sciences, Rome) in 1929, he was the Copley Medallist (Royal Society, London) in 1949, Faraday Medallist in 1950, Baily Medallist in 1951 and Silvanus Thompson Medallist in 1955. In 1959 he received the Ford Foundation’s Atoms for Peace Award Medal, in 1961 the Niels Bohr Medal and the Rosenberger Medal of the University of Chicago. Honorary degrees conferred upon Professor de Hevesy include Doctor of Philosophy, Uppsala, Freiburg, and Copenhagen; Doctor of Science, Ghent, Liège, London, and Capetown; and Doctor of Medicine, São Paulo, Rio de Janeiro, Turin, and Freiburg. He is a Fellow of the Royal Society (London), the Swedish Academy of Sciences, Gothenburg Academy, and eleven other scientific academies. He is Honorary Fellow of the Chemical Society (London), the Royal Institution (London), the British Institute of Radiology, the Finnish Chemical Society, the German Bunsen Society, the German Physiological Society, the Chemical Society of Japan, and the American Society of Nuclear Medicine. In addition, he holds honorary memberships of many more learned societies.

The aforementioned study paved the way for Hevesy’s later investigations that would prove that biological systems exist in a dynamic equilibrium. Hevesy first and unambiguously postulated this concept in “Radioactive Indicators in the Study of Phosphorous Metabolism in Rats” (Chievitz and Hevesy 1935). Today, it is hard to appreciate the revolutionary nature of the paper – a paper that “figuratively shook the earth of biology” – a paper that “at least one person has memorized…as many another has a great poem”(Huggins 1965).

Harry Truman once said, “the only new thing in the world is the history you don’t know.” And as Hevesy would learn to his shock and amazement, he wasn’t the first to realize that biological systems are in a constant state of turnover (Arrhenius 1996). St. Thomas Aquinas had come to this conclusion 700 years earlier! The Italian philosopher had been struggling with a perplexing theological issue: what would happen on the day of resurrection to a man who had been a cannibal? How could the body of someone be reconstituted if its parts had also belonged to several others? St Thomas’s conclusion was eminently logical: “the identity of the body is not dependent on the persistence of the same material particles,” “[that] during life, by the process of eating and digesting, the body undergoes perpetual changes.”

Hevesy might have been disappointed that he could no longer claim priority to a theory that once “shook the earth,” but he would henceforth make a point of giving the saint full credit.

the Price Cannizzaro of the Academy of Science Italian in 1929
the Nobel Prize of chemistry in 1943 for its work in the field of the radioactive tracers
the Medal Copley of the Royal Society of London in 1949
the Faraday Lectureship of the Royal Society off Chemistry British in 1950
the Medal Baily in 1951
the Medal Sylvanus Thompson in 1955
the Atoms for peace award in 1959
the Medal Niels Bohr in 1961.

AngelFire: The Nobel Prize in Chemistry 1943

Sandwalk Blog: The Nobel Prize in Chemistry 1943. “for his work on the use of isotopes as tracers in the study of chemical processes”