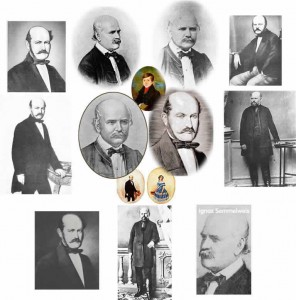 Semmelweis observed that, among women in the first division of the clinic, the death rate from childbed fever was two or three times as high as among those in the second division, although the two divisions were identical with the exception that students were taught in the first and midwives in the second. He put forward the thesis that perhaps the students carried something to the patients they examined during labour. The death of a friend from a wound infection incurred during the examination of a woman who died of puerperal infection and the similarity of the findings in the two cases gave support to his reasoning. He concluded that students who came directly from the dissecting room to the maternity ward carried the infection from mothers who had died of the disease to healthy mothers. He ordered the students to wash their hands in a solution of chlorinated lime before each examination.

Under these procedures, the mortality rates in the first division dropped from 18.27 to 1.27 percent, and in March and August of 1848 no woman died in childbirth in his division. The younger medical men in Vienna recognized the significance of Semmelweis’ discovery and gave him all possible assistance. His superior, on the other hand, was critical—not because he wanted to oppose him but because he failed to understand him. 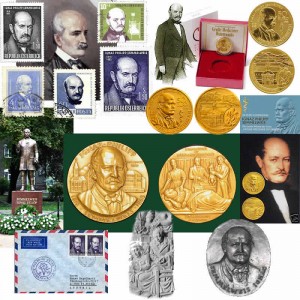 In the year 1848 a liberal political revolution swept Europe, and Semmelweis took part in the events in Vienna. There is no evidence that Semmelweis participated personally in the events of 1848. Some of Semmelweis’s brothers were punished for active participation in the Hungarian independence movement, and one must assume that the Hungarian born Semmelweis was sympathetic to the cause. Semmelweis’s superior, Johann Klein, was a conservative Austrian and unsympathetic to the independence movements and at unease with the other revolutions of 1848 in the Habsburg areas. It seems likely that Klein mistrusted Semmelweis
After the revolution had been put down, Semmelweis found that his political activities had increased the obstacles to his professional work. In 1849 he was dropped from his post at the clinic. He then applied for a teaching post at the university in midwifery but was turned down. Soon after that, he gave a successful lecture at the Medical Society of Vienna entitled “The Origin of Puerperal Fever.” At the same time, he applied once more for the teaching post, but, although he received it, there were restrictions attached to it that he considered humiliating. He left Vienna and returned to Pest in 1850.

At the St. Rochus Hospital in Budapest, Semmelweis was allowed to introduce disinfection in the obstetrical division. In 1855 he became professor of theoretical and practical midwifery at the University of Pest.

Despite the results, Semmelweis’s ideas were not accepted by the other obstetricians in Budapest. The professor of obstetrics at the University of Pest, Ede Flórián Birly, never adopted Semmelweis’ methods. He continued to believe that puerperal fever was due to uncleanliness of the bowel. Therefore, extensive purges was the preferred treatment.
After Birly died in 1854, Semmelweis applied for the position, but he received fewer votes from his Hungarian colleagues than did Carl Braun — Semmelweis’s nemesis and successor as Johann Klein’s assistant in Vienna. Semmelweis was eventually appointed in 1855, but only because the Viennese authorities overruled the wishes of the Hungarians on the grounds that Braun did not speak Hungarian. As professor of obstetrics, Semmelweis instituted chlorine washings at the University of Pest maternity clinic. Once again he attained impressive results

Semmelweis turned down an offer in 1857 to become professor of obstetrics at the University of Zurich.

But the deaths of two children during the next few years added personal grief to professional suffering, a suffering that intensified as opposition to his ideas spread throughout Europe.

With much reluctance Semmelweis organized his observations and published his great work on puerperal fever, The Etiology, Concept, and Prophylaxis of Childbed Fever (1861). Even this did not silence his opponents, and Semmelweis, unable to accept this resistance, was committed to an insane asylum in 1865, where he died of blood poisoning. Not until 1883 did the Boston Lying-In Hospital introduce methods of antisepsis, methods similar to those used several decades earlier by Semmelweis.

Semmelweis’ advice on chlorine washings was probably more influential than he realized himself. Many doctors, particularly in Germany, appeared quite willing to experiment with the practical handwashing measures that he proposed, but virtually everyone rejected his basic and ground-breaking theoretical innovation — that the disease had only one cause, lack of cleanliness. Professor Gustav Adolf Michaelis from a maternity institution in Kiel replied positively to Semmelweis’ suggestions — eventually he committed suicide, however, because he felt responsible for the death of his own cousin, whom he had examined after she gave birth.

On a broader scale, to a contemporary reader, Semmelweis would appear to have demonstrated glaringly evident experimental evidence, that chlorine washings reduced childbed fever. Today, it may seem absurd that his claims were rejected, precisely on the grounds of purported lack of scientific reasoning, or what today would be called a scientific proof. It is equally absurd that his unpalatable observational evidence only became palatable when seemingly-unrelated work by Louis Pasteur in Paris some more than twenty years later suddenly offered a theoretical explanation for Semmelweis’ observations — the germ theory of disease.

As such, the Semmelweis story is often used in university courses with epistemology content, e.g. philosophy of science courses — demonstrating the virtues of empiricism or positivism and providing a historical account of which types of knowledge count as scientific (and thus accepted) knowledge, and which do not. It is an irony that Semmelweis’ critics considered themselves positivists. They could not accept his ideas of minuscule and largely invisible amounts of decaying organic matter as a cause of every case of childbed fever. To them, Semmelweis seemed to be reverting to the speculative theories of earlier decades that were so repugnant to his positivist contemporaries. (For an example of an earlier dead-end speculative theory that had halted scientific development, see phlogiston).

- Semmelweis is now recognized as a pioneer of antiseptic policy
- Semmelweis University, a university for medicine and health-related disciplines (located in Budapest, Hungary), is named after Semmelweis; and
- The Semmelweis Orvostörténeti Múzeum (Semmelweis Medical History Museum) is located in the former home of Semmelweis.
- The Semmelweis Klinik, a hospital for women only, located in Vienna, Austria.
- In 2008 Semmelweis was selected as a main motif for the Austrian 50 euro Ignaz Semmelweis commorative coin. The obverse shows a portrait of the eminent doctor together with the rod of Asclepius.