János Irinyi studied in Nagyvárad and Debrecen and, then, he studied chemistry in the Vienna Polytechnic. 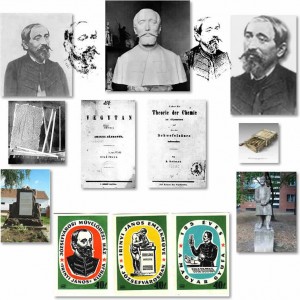 In 1831 Charles Sauria of France incorporated white, or yellow, phosphorus in his formula, an innovation quickly and widely copied. It is in 1836 that Irinyi invented the phosphorous match with noise-free ignition, in connection with an experiment made by his professor, Pál Meissner of Transylvanian origin. During a presentation, the professor rubbed sulphur and lead-dioxide together, “while promising to the students that the sulphur would ignite; however, this did not happen; it suddenly came to my mind that,” Irinyi said later, “if phosphor had been used instead of sulphur, it would have been in flames for some time”. This sudden idea gave birth to the noise-free match. Irinyi eliminated the potassium chlorate from the ignition mixture that caused the explosion-like ignition; instead, he mixed phosphor with lead dioxide.

In a paper published in 1840 under heading “A vegyaránytan” (approx.: Proportionality in Chemistry), Irinyi explains the mutual effects of substances on each other. His paper entitled “A vegyrendszerről” (approx.: On the Chemical System) was also published at that time. His paper “A vegytan mint vezércsillag a történet tudományában” (Chemistry as a Guiding Star in Historical Science) was published in 1842.

Irinyi also took part in the 1848 Hungarian Revolution. After the downfall he was in prison and the failure has broken his spirit. He did not publish any more study.

Irinyi was one of the most talented Hungarian chemists. He completely acquired the knowledge of the new chemistry developed in the spirit of A.L. Lavoisier.

He contributed significantly to the development of the Hungarian professional terminology in chemistry.