After winning the Olympic middleweight title in 1948, Hungary’s László Papp won the light-middleweight crown in 1952 and 1956 to become the first boxer to win three Olympic gold medals. He also won European amateur titles in 1949 and 1951. Possibly his finest victory in the Olympic ring came in the 1956 final when he beat José Torres (USA), a future world professional champion. A skillful, hard-punching southpaw, Papp was the first fighter from the Soviet bloc allowed to turn professional and he won the European middleweight title in 1962. However, in 1965, the Hungarian authorities withdrew their permission for him to fight professionally and the chance of a world title bout was denied him. Papp later served as the coach of the Hungarian national boxing team from 1971-92. 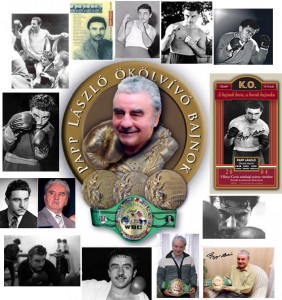 Papp, a former railway clerk, competed as a middleweight (161 pounds [73 kg]) at the 1948 Olympic Games in London. A hard-hitting left-hander, he won the first of his gold medals by defeating Britain’s John Wright in the final match. In 1952, when the light middleweight (156-pound [71-kg]) division was introduced at the Olympic Games in Helsinki, Finland, Papp moved down into that division and defeated Theunis van Schalkwyk of South Africa for his second gold medal. At the 1956 Olympics in Melbourne, Australia, Papp won an unprecedented third gold medal by defeating American José Torres, a future light heavyweight world champion….

A world championship fight against Dick Tiger and also his successor Joey Giradello was planned often for Papp but it never materialized. Papp had already a contract of facing Tiger in the United States and he was willing to travel there, but the Hungarian officials prevented it. They announced that it was time for the 38-year-old Papp to end his career and to come back to his homeland to help the up-and-coming prospects. The loyal man that he was, Papp did just that and finished his professional career being undefeated at 29 fights. Papp’s European championship went to Italian Nino Benevenuti, who would later become a great middleweight world champion. Around 1964 was one of the best middleweights in the world, some magazines even ranked him to be the first contender for Giradello. After his active career Papp worked long as the coach for the Hungarian national team.

Papp was known as a quiet, honest man who never bragged about himself but did his talking inside the ring. And in there, his fists told a story that will never be forgotten from the minds of the boxing fans. Condolences to Papp’s family and friends, he, if anybody, has deserved his rest. Rest in peace legend! …

He scored 55 first round knockouts as an amateur …

was prevented from crowning his career, his outstanding capabilities are remembered all over the world. As an indication of this, he was invited, together with Muhammad Ali, to the Gala of the Athletes’ of the Century held in Vienna in 1999. …