Bárány was the son of Ignaz Bárány, a bank official, and Marie Hock.
Robert was the eldest of six children. When he was quite young he contracted tuberculosis of the bones, which resulted in permanent stiffness of his kneejoint. It is thought that this illness first led him to take an interest in medicine. The disability, however, did not prevent him from playing tennis and walking in the mountains, right through his life. He was always top of the form – in the primary school, the grammar school, and was among the best of his year even at the university. 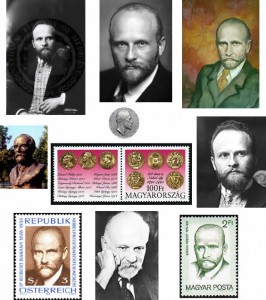 After completing his medical studies at Vienna University in 1900, Bárány attended the lectures of Professor C. von Noorden in Frankfurt am Main for one year, and then studied at the psychiatric-neurological clinic of Professor Kracpelin in Freiburg i.Br. It was there that his interest in neurological problems was first awakened. On his return to Vienna he became the pupil of Professor Gussenbauer, the surgeon.

In 1903 he returned to Vienna where he was a student of Sigmund Freud (1856-1939). A favourite story of his concerned Freud’s theory that dreams were an expression of desire (Wunschträume). Freud used to tell his students “if you can’t explain your dream, come and see me”. Bárány did so and described for Freud a dream that had nothing to do with desire. Freud’s retort was “That is very simple. You had the desire to contradict me”.

He followed up the theories of Flourens, Purkinje, Mach, Breuer and others, and clarified the physiology and pathology of human vestibular apparatus. He was awarded the Nobel Prize for his work in this field in 1914.

Unfortunately, this phase of great productivity was to be interrupted by thestart of World War I. Bárány, who was of Jewish descent, was dispatched by the army to the fortress of Przemysl on the border between Polandand Russia, where he served as a medical officer. While there, Bárány continued to study the connection between the vestibular apparatus and the nervous system. He also developed an improved surgical technique for dealing with fresh bullet wounds to the brain.

However, in April 1915, the Russians occupied Przemysl, and Bárány was transported along with other prisoners by cattle car to Merv in central Asia. Conditions there were unsanitary and difficult, and Bárány came down with malaria. Still, he was relatively fortunate: the medicalcommander in Merv knew him by reputation and placed him in charge of otolaryngology (the medical specialty concerned with the ear, nose and throat) for both Russian natives and Austrian prisoners. The Russians were grateful patients. Alter Bárány had successfully treated the local mayor and his family, he became a daily dinner guest in their home.

It was while he was still a prisoner of war that Bárány received the news that he had won the Nobel Prize. Thanks to the personal intervention of Prince Carl of Sweden and the International Red Cross, Bárány was released in 1916. He returned to Vienna that same year, but was bitterly disappointed by the reception he received from colleagues there. They claimed he had inadequately citedtheir own contributions to his work. These accusations were investigated by the Nobel Prize Committee, which found them groundless. Nevertheless, the attacks prompted Bárány to accept a post as professor at the University of Uppsala in Sweden in 1917, where he remained for the rest of his life. Eventually, he rose to the position of chairman of the department of ear, nose, and throat medicine there. He built up a great reputation as an able surgeon for sinus disorders, deafness and cerebellar and cerebral abscesses.

Bárány adapted himself well to his new country, Sweden, where his activities as philanthropist, pacifist and humanist brought him further prominence. It was upon his instigation that the International Academy of Politics and Social Science for the Promotion of World Peace was founded in Sweden in 1929.

During the latter part of his life Bárány studied the causes of muscular rheurmatism, and continued working on a book dealing with this subject even after he had suffered a stroke and was partially paralysed. Bárány married Ida Felicitas Berger in 1909. They had two sons; the elder became Professor of Pharmacology at the University of Uppsala, his brother Assistant Professor of Medicine at the Caroline Institute, Stockholm. They also had a daughter, who married a physician and lives in the U.S.A.

Bárány was essentially a man of theory. He would develop a theory and then put it to the experimental test. A victim of insomnia, he would lie in bed until the early hours thinking, thinking, thinking. His dependency on theory is illustrated by the following story. While he was in Berlin in Oskar and Cécile Vogt’s laboratory he and the Vogts were performing an experiment on a monkey. Oskar Vogt syringed cold water in one ear and simultaneously stimulated the cortex of the same side while Cécile Vogt and Bárány watched the direction in which nystagmus occurred. On cessation of the ocular movements Bárány declared that they were to the left, whereas Cécile argued that they were to the right. The argument grew more and more heated for the ensuing five minutes. The next day Bárány came into the laboratory and stated that during the night he had reconsidered the matter. He conceded that Cécile was right. He had allowed himself to be so influenced by theory that he failed in the observation. The same happened to Bárány several times in the Vogts’ laboratory. His unreliable memory for observed facts might well serve as an explanation for his forgetfulness of the work of Spitzer. There was no question that he was most honest and upright.

The Bárány chair, named for the physiologist Robert Bárány, is a device used for aerospace physiology training, particularly for student pilots. The subject is placed in the chair, blindfolded, then spun about the vertical axis while keeping his head upright or tilted forward or to the side. The subject is then asked to perform tasks such as determine his direction of rotation while blindfolded, or rapidly change the orientation of his head, or attempt to point at a stationary object without blindfold after the chair is stopped. The chair is used to demonstrate spatial disorientation effects, proving that the vestibular system is not to be trusted in flight. Pilots are taught that they should instead rely on their flight instruments.

The device is also used in motion sickness therapy, which generally has a high success rate.

Nobelprize: Robert Bárány, The Nobel Prize in Physiology or Medicine 1914