He was a Hungarian-German-American engineer and physicist who was active primarily in the fields of aeronautics and astronautics. He is personally responsible for many key advances in aerodynamics, notably his work on supersonic and hypersonic airflow characterization.

Von Kármán was born into a Jewish family at Budapest, Hungary as Kármán Tódor.
He studied engineering at the city’s Royal Technical University, known today as Budapest University of Technology and Economics. After graduating in 1902 he joined Ludwig Prandtl at the University of Göttingen, and received his doctorate in 1908. He taught at Göttingen for four years. In 1912 accepted a position as director of the Aeronautical Institute at RWTH Aachen, one of the country’s leading universities. His time at RWTH Aachen was interrupted by service in the Austro-Hungarian Army 1915–1918, where he designed an early helicopter. He left RWTH Aachen in 1930.

Apprehensive about developments in Europe, in 1930 he accepted the directorship of the Guggenheim Aeronautical Laboratory at the California Institute of Technology (GALCIT) and emigrated to the United States. He later became a naturalized citizen of the United States. 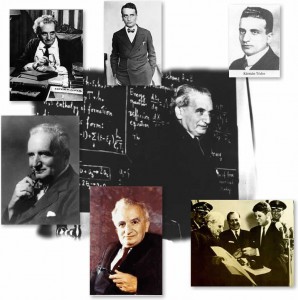 His personal scientific work continued unabated with important contributions to fluid mechanics, turbulence theory, supersonic flight, and mathematics in engineering, aircraft structures, and wind erosion of soil. His open-mindedness was well demonstrated by his involvement in the development of astronautics. In 1936, in spite of the general disbelief in academic circles in the possibilities of ‘Buck Rogers’-style rocket propulsion and its applications, he supported the interest of a group of his students in the subject. Within two years the US Army Air Corps sponsored a project at his laboratory on the use of rockets to provide super-performance for conventional aircraft, especially to reduce their distance of takeoff from the ground and from naval aircraft carriers. This project was known as JATO (Jet Assist Take-off rockets.) These rockets were what started the company Aerojet, which is located in the city of Azusa. Other missiles that were made through the years are: AEROBEE FALCON, HAWK, BULLPUP, SPARROW, and Standard Missile.

In 1944, he became the cofounder of the present NASA Jet Propulsion Laboratory, when it undertook America’s first governmental long-range missile and space-exploration research program for the US Ordnance Department. In 1944, he chaired the forerunner to the Pentagon’s US Air Force Scientific Advisory Board, and as General Arnold put it, “You know, we’ve been winning this war by brute force and mass production and I don’t like it. Maybe next time we won’t be able to produce as fast and we’ll get snowed under. I want you people to look ahead 20 years in aviation and tell us where we’re going and how we are going to get there.” This realization that the Allies were years behind influenced the development of extremely focused in-house research capability in a number of breakthrough technologies. The board’s blueprint for post-war military systems was titled Where We Stand (which in 1945 predicted supersonic flight, ICBMs, nuclear warheads, and SAM missiles) and the 12-volume Toward New Horizons introduced by Von Kármán’s SCIENCE: The Key to Air Supremacy.

In 1946 he became the first chairman of the Scientific Advisory Group which studied aeronautical technologies for the United States Army Air Forces.

His dedication to international scientific cooperation led him, in 1947, to propose to the United Nations the establishment of an international research center for fluid and soil mechanics in the Middle East, which, though unfulfilled, contributed to the development by UNESCO of the Arid Zone Research Project in 1950. He conceived the idea of cooperation among aeronautical engineers of the member nations of the North Atlantic Treaty Organization, and in 1951, obtained approval to launch the Advisory Group for Aeronautical Research and Development (AGARD), of which he was chairman until his death. In 1956, his efforts brought into being the International Council of the Aeronautical Sciences (ICAS) and, in 1960, the International Academy of Astronautics. One of the outstanding activities of the academy under his presidency was its sponsorship, in 1962, in Paris, of the First International Symposium on the Basic Environmental Problems of Man in Space, at which for the first time scientists from the United States and the Soviet Union, as well as other countries, exchanged information in this field. It was scientific exchanges such as these that secured arms limitation treaties between the super-powers and turned the nuclear clock back somewhat from “one minute to midnight”. In the post-World War II years, there was hardly an Aeronautics Department in the world that if he visited, faculty members did not come out to greet their old mentor. And as had been his traditional teaching technique, they fell into immediate animated conversations about what was the latest in aerodynamics, what new theory, who solved what problem, and–always a von Kármán question–what cutting edge challenges faced the former students. In later years he was again associated with Aachen, Germany, where he died May 7, 1963.

In 1963 he was the first recipient of the National Medal of Science from President John Kennedy. 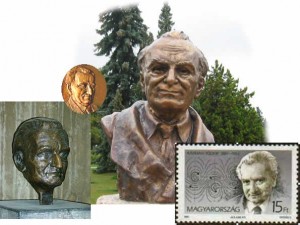 University of Southern California Professor Shirley Thomas (after nearly two decades of petitioning) was able to create a postage stamp in his honor. It was first issued in 1992.
In 1956 von Kármán founded a research institute in Sint-Genesius-Rode, Belgium, which is now named after him: the von Karman Institute for Fluid Dynamics.

Personally, von Karman was known as a colorful, multilingual character who enjoyed entertaining a diverse circle of friends and acquaintances.

In his contributions are summed up as follows:-

Despite his many public activities, he never became a great public figure in the way of many inventors, perhaps because theoretical aerodynamics is not a very accessible field to the layman; nevertheless, his work in that field and in rocket research has helped shape both scientific and political history.

It would be reasonable to ask how Kármán saw his loyalties having advised many countries on military matters:

Despite his many public activities, he never became a great public figure in the way of many inventors, perhaps because theoretical aerodynamics is not a very accessible field to the layman; nevertheless, his work in that field and in rocket research has helped shape both scientific and political history.

“Scientists study the world as it is, engineers create the world that never has been. ”
- Theodore Von Kármán -